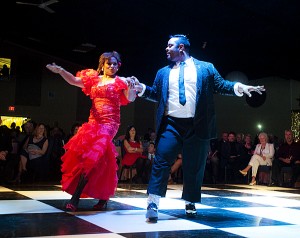 Brenda Martin and Rick Payne perform a salsa dance during the Dancing with Our Stars event Saturday evening.

CATLETTSBURG, Ky. — The third annual Highlands Museum and Discovery Center’s Dancing with our Stars fundraiser was a success Saturday evening as 11 local celebrities and their dance partners stole the show at the Boyd County Community Center. The event is the museum’s biggest fundraiser of the year.

“When we started, we were looking for a premier event and found it with Dancing with our Stars,” Highlands Museum executive director Carol Allen said. “This is our third year and all three have been an extreme success. We have a great group of professional dancers that make our celebrities look wonderful.”

Allen said the money is used to help with educational exhibits at the museum as well as upgrades that the museum needs.

“We started practicing in October,” Charles-Joe said. “But tonight’s been the fun part with the hair, makeup and crowd. Everyone’s been supportive and it’s a lot of fun.”
First, second and third place winners were determined by the number of $1 votes each couple received, while People’s Choice was based on the crowd and Judge’s Choice was determined by the three judges.

Denver whips Carolina to give Manning Super win in finale