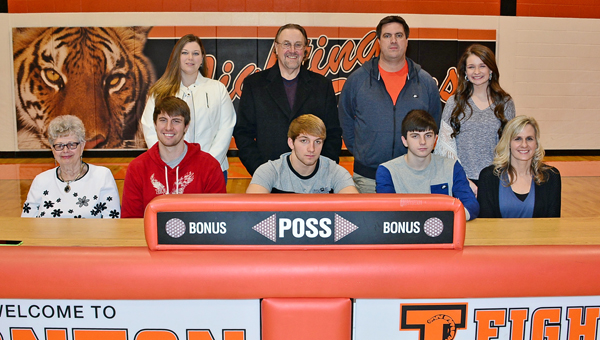 When people talk about America as the land where dreams can come true, count Andrew Barker among those who believe.

The Ironton Fighting Tigers’ 6-foot-1, 200-pound All-Ohio senior will get the chance to fulfill his dream after signing with the NCAA Division II Ashland University Eagles on Wednesday.

“It’s been one of my goals since I was little. I always looked up to kids who do that after high school and it’s something I’ve wanted to do to get college paid for,” said Barker. “It’s definitely going to be a fun experience.”

Barker had numerous offers but the main choices were narrowed down to Ashland, Ohio Dominican, Missouri Baptist, University of Pikeville, and Sterling College in Sterling, Kansas.

“(Ashland) was a bigger college and it’s the nicest campus and everything about it I liked so that’s where I chose to go,” said Barker.

Barker was second on the team in tackles and second in rushing. As a halfback, he gained 518 yards on 10 carries for a 4.3 yards per carry average and he scored three touchdowns.

He also filled in at fullback in certain situations.

“My goal is by my sophomore year to try and get on special teams and get into the mix and then my junior year I’m hoping to start at linebacker,” said Barker.

“It all depends on how things work out as to what they need, but fullback is an option for me, too.”

Barker said Ashland’s coaches were impressed with him on both sides of the ball and they are open to using him at either inside or outside linebacker.

“They’re looking at me for both, just whatever is needed. If I end up inside they’ll put me on the bigger plan to put on pounds or just try and try to get me quicker if they need me outside,” said Barker.

“I’m happy for Andrew. This was a goal of his to make it and get in a good college program. He had several good small college choices and I think it was a good fit for him,” said Vass.

“Ashland has a good history and I think if he continues to work hard and do the things he’s supposed to do he’ll enjoy his experience and I think he’ll end up having success there. He’s a hard-nosed kid and a hard worker.”

Andrew is the son of Arnette Barker and Phillip Barker.