Young looks to be ‘big hit’ with D1 Tigers 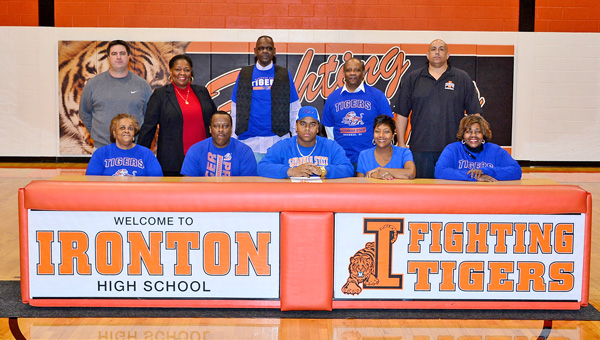 Don’t expect the Mafia to hire Desmond Young as a hit man. He already has a new job.

The Ironton Fighting Tigers 6-foot-2, 220-pound senior linebacker has signed on to do his hitting for the Savannah State University Tigers in Savannah, Ga.

For Young, getting another opportunity to hit was the best news he could get.

“When I was in the sixth grade everybody told me I had a future in football. So I looked forward to it and I kind of fell in love with hitting people. I just like taking my anger out. I’m stressed when I’m not playing football,” said Young.

There will be plenty of opportunities for stress release in the future with Savannah State. The program is rebuilding after coming off NCAA sanctions three years ago that led to a coaching change.

Young said the past sanctions were not a determent in his decision. In fact, he said the honesty of head coach Earnest Wilson was a selling point.

“I liked the way they handled everything. They’ve had sanctions and they just got a new coach and he was straight up with us. He told us when he first got there he had to give away scholarships and now he’s actually able to recruit and this is the third year of his coaching and our class is his class that he has his mind set on,” said Young.

Young — who was Ironton’s leading tackler the past two seasons — signed with the Tigers who are a Division I program and members of the Mid-Eastern Athletic Conference (MEAC).

He had discussions with Kentucky, Louisville, Marshall, Ohio University, Toledo, Fordham, Indiana and a plethora of other schools.

“There were a lot of schools who looked at me and were interested but didn’t offer me, so it was Savannah State for me,” said Young.

Although there is never a timetable regarding playing time for any new recruit, Young said there is definitely an opportunity to play.

“It’s all on me. It’s all about how I work and how I handle the situation like catching up to the speed of the game and getting the plays down. Everything else will follow through,” said Young. “The North/South Game will help a lot.”

Young has been a first team selection on the Associated Press Southeast District Division V team the past two seasons. Last year he was the Defensive Player of the Year and he was named first team All-Ohio.

Besides his defensive prowess, Young led Ironton with 805 yards rushing on 151 carries for 5.3 yards per carry average and he topped the Fighting Tigers in scoring with 93 points including 15 touchdowns.

Young also took on an added leadership role when standout running back D’Angelo Palladino — a Fordham signee — went down early in the season with an injury.

“It was something I looked forward to. Even when D’Angelo went down — he’s my best friend — it was tough on me and tough on the team because we all knew how he could contribute to the team,” said Young.

“But then again we knew we had to step up. The seniors ahead of me have shown me how to handle situations and how to handle the younger guys. I took advantage of the opportunity to lead my team.”

Ironton head coach Mark Vass said he has no worries that Young will be able to play at the next level.

“Desmond has been an outstanding player for us the past four years and he knows what it takes to play at a higher level,” said Mark Vass.

“He’s done the job on and off the field. He’s been a leader and he’s been a force on both sides of the ball. He’s a worker and he’s got the tools to play at that level. I think it’s a great opportunity for him and I think the sky’s the limit for him.”

Young plans to major in communications.

Desmond is the son of Joe Young and Anissa Young.

Payne at home with Rio Grande