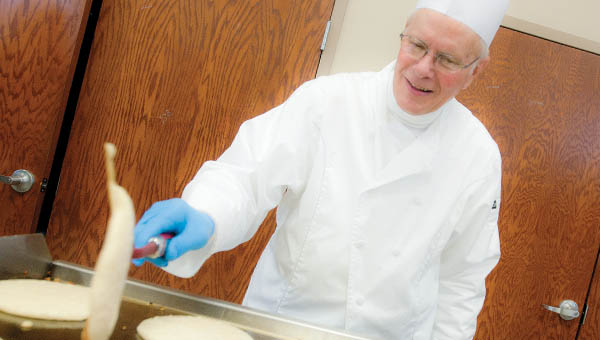 Five-year-old Avery Click of Ironton likes to shake up the bottle of maple syrup before she pours it all over her pancakes. That and make sure there is lots of butter.

This was her first time at the annual Ironton Rotary Club Pancake Breakfast on Saturday.

“Can we do this tomorrow?” she asked her mother, Emily.

Unfortunately, Avery will have to wait another year.

It was also the first time for the Knights of Columbus hall as the event’s venue.

Traditionally, the breakfast is held at the former AEP building down the street from the K of C on South Third Street. But with Marco’s pizza restaurant taking over the site, the club had to find a new locale.

“The Knights of Columbus has graciously opened their doors to us,” Rotary Club president Susan McComas said. “We can seat so many more people. It’s going great.”

By 9 a.m. the Rotary Club’s official runner was headed to Bartram’s for more sausage and pancake batter.

Three griddles were fired up and going constantly with Massie Schemmel manning the steamer filled with sausage links.

“I don’t remember this many people coming in and out of the AEP building,” McComas said. “This is a better setting. It’s almost like a whole new fundraiser.”

But as McComas sees it, just as importantly is the collaborative sense the event has created with the location.

“I like the fact it’s groups working together,” she said. “This says much about partnership and the community.”

Valentine’s Day has got to be one of the most divisive holidays ever created, at least the way we celebrate... read more