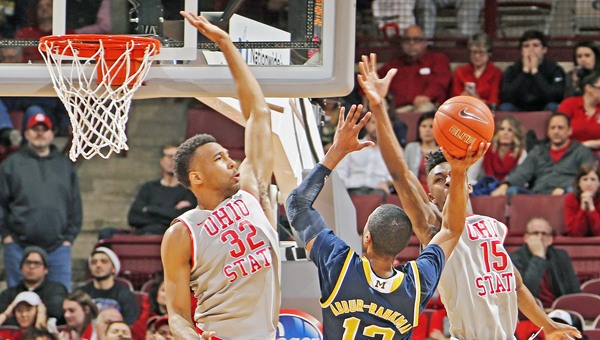 Ohio State Buckeyes guard Kam Williams (15) blocks the shot of Michigan Wolverines guard Muhammad-Ali Abdur-Rahkman (12) with the inside help from center Trevor Thompson (32) during the second half on Tuesday at Value City Arena in Columbus. ((Kyle Robertson/Columbus Dispatch/TNS))

“We’re still breathing,” Tate said after scoring 13 points and grabbing four rebounds. “We’re still alive. We’re just keeping the streak going. We still have a lot of work to do.”

The Buckeyes (17-10, 9-5) led nearly the whole way in a game they likely had to win to keep alive hopes of receiving an NCAA tournament bid next month.

The Wolverines became the second team with a top 50 RPI ranking Ohio State has beaten this season, joining Kentucky.

Marc Loving tallied 13 points and 10 rebounds for the Buckeyes, notching his fifth double-double.

“I thought Marc was really dialed in,” Ohio State coach Thad Matta said. “The biggest thing I liked tonight was the way he got rebounds. He was above the rim, out of his area and getting boards.”

Mark Donnal scored 17 points to lead Michigan, which had a two-game winning streak snapped. Zak Irvin added 15 points for the Wolverines (19-8, 9-5) while Derrick Walton Jr. had 13.

Ohio State shot 54 percent from the floor while holding the Wolverines to 39 percent.

Michigan struggled to find the range from beyond the arc, going 5 for 24 from 3-point range.

“As Ohio State showed in a couple of wins this year, Kentucky included, they can really guard,” Michigan coach John Beilein said. “They really gave us a difficult time getting open shots. It was tough just to score baskets. Their length was too much for us. They posted us up at three or four different positions and got easy shots out of those post ups. Really a talented team that if you follow their scores lately is coming together.”

Tate personally outscored Michigan 7-1 in the final 2:01 of the first half to state Ohio State to a 36-28 halftime lead.

The Buckeyes stretched their lead to 14 points eight minutes into the second half.

Michigan scored seven in a row to cut the deficit in half, but Loving connected from 3-point range to put the Buckeyes back on top 55-45 with 10 minutes to go.

“The cohesiveness we have to play with was evident out there,” Matta said. “Everybody embraced their time on the floor. I thought we had an active bench. The guys were into the game. I’d like to bottle this up and continue to move forward.”

Michigan: The Wolverines played without star guard Caris LeVert, who has been limited to 15 games this season by a lower left leg injury.

Ohio State: Former Buckeye and 2010 National Player of the Year Evan Turner was on hand for a halftime ceremony in which his No. 21 jersey was raised to the rafters.

Michigan plays at Maryland on Sunday.

Ohio State improved to 11-1 under Matta against Michigan in Columbus.

Michigan had a 34-31 rebounding advantage. Ohio State won for only the second time in 12 games this season when losing the battle on the boards.

QUOTE OF THE NIGHT

Matta on a pregame text he received from Dayton coach Archie Miller, who was an OSU graduate assistant early in Turner’s career: “He said, ‘You know when we used to work Evan out and he would get mad and punt the balls into the rafters we had no idea he was aiming to where his jersey was going to hang some day.”’

Jim Walker jim.walker@irontontribune.com   ROCKSPRINGS — The St. Joseph Flyers had two choices: go through the motions or put their... read more