Office-seekers take their message to voters 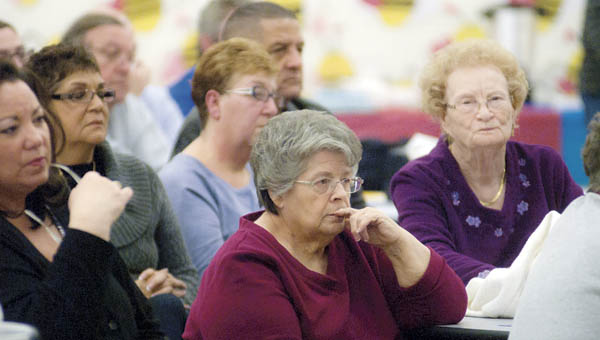 Area residents gathered in the cafetorium at Burlington Elementary School for the Meet the Candidates event Thursday. The event is sponsored by the Concerned Citizens of Burlington.

BURLINGTON — The race for the two Lawrence County Commission seats on the ballot dominated the event at the Meet The Candidates forum at Burlington Elementary on Thursday night.

The forum, hosted by the Concerned Citizens of Burlington, drew about 100 people to hear the candidates make their pitch for the March 15 primary election.

Incumbent Republican commissioners Bill Pratt and Les Boggs were on hand, as well as those challenging them.

Pratt said voters should look for someone they think can represent them, based on the qualities they demonstrate.

Pratt cited his experience working as a dairy farmer, stating it taught him the value of keeping a budget. He pointed to the $2.1 million carryover the county had in the past year and said that it was putting things in motion.

“Eventually, I think we will get to a point where we can build a new jail,” he said.

He touted what he felt were his strongest accomplishments in office, such as having “the No. 1 ambulance system in the state of Ohio,” and helping to establish the Sybene-Chesapeake Senior Center.

“That’s a real collaborative effort,” Pratt said of the work the commission has done with the center.

Challenging Pratt for his seat was Republican Dave Lucas, who outlined his plan for his first 100 days in office.

Lucas said the county needs to solve what he called “a jail fail,” and said sheriff Jeff Lawless has been the victim of budget cuts.

“We are hemorrhaging money every day by sending people to other counties,” he said, stating that Lawrence County should be taking prisoners from other parts of Ohio.

Second, Lucas addressed the issue of drugs in the county, calling for treatment of addicts and training to help them in life.

“Redirect and reconnect,” he called the approach.

And, third, he pleded to work to create “100 jobs in 100 days, and said the best way to create revenue in the county is “to get people working.”

Pratt, while not naming Lucas directly, followed him in the line-up and referred to “unrealistic” plans for 100 days, noting the amount of time he’s served on the job and the challenges he’s familiar with.

Running for Pratt’s seat on the Democratic side is Tim Edwards, who said “life experience is the biggest factor” in preparing one for the job of commissioner.

He spoke of his work teaching vocational school and the four years he’s spent running a service station and seeing his business grow.

Edwards said a county commissioner needs to be able to “think on their feet.”

“People are always counting on everything to work out the way you write it down,” he said. “That’s not reality.”

He said his work ethic and experience with a budget have prepared him to serve, and that he hopes to make the county more friendly to business.

Also wanting Pratt’s seat Democrat Jon Ferguson also pointed to his life experience, from his childhood in farming to his time in the Navy to heading Ironton aLive for two years.

“These kinds of organizations are a huge factor in moving things forward in the county,” he said of similar community groups.

Ferguson told of his work in corrections, manufacturing and health care, where he said he’s had a lot of leadership roles.

He said seeing the terrorist attacks of Sept. 11, 2001 served as “my epiphany” in steering him to devote his life to public service.

Ferguson spoke of the need for more jobs in the area.

“I want to see us at a place where we can build new small businesses with sustainable wages,” he said. “Forty years ago you could get a good job in Lawrence County. I want us to be able to feel that again.”

Democrat Doug Malone vying as well for Pratt’s job said he’s seen first-hand the “frustration” people have with government and would work to provide effective leadership.

He said he agreed with Lucas’ plan for 100 new jobs and spoke of the need for more employment in the county.

But he said the most important part of the job is serving the public.

“It’s not about me, it’s about people,” he said, telling of his efforts to help a 23-year-old suffering from diabetes who had not been able to get help from the department of human services.

The fourth candidate on that side of the aisle is Democrat Jason Tolliver cited his work in the construction business, noting his work in budgeting and how he has overseen hundreds of employees on projects.

He said that he’s observed many of the problems in the county and had decided he “couldn’t sit on the sidelines anymore.”

Like the others, he cited the need for improvements in the jail.

He said the way to measure success is “to put action in place to measure our goals.”

Incumbent Republican Commissioner Les Boggs said there was “no need to change my seat,” and listed his accomplishments in office, such as getting funding for the senior center, moving the juvenile center to a 12-acre complex and taking care of health insurance.

He noted his endorsement by the Teamsters union, referring to himself as “a labor-friendly Republican.”

He pointed to new businesses coming to area, such as the Big Boy restaurant and Holiday Inn in Ironton.

One thing he said he was particularly proud of was the transformation of the dog shelter to a “dog adoption agency,” and said that 97 percent of dogs at the shelter are adopted.

He concluded by noting the county’s finances.

Challenging Boggs was Republican former Ironton Mayor Rich Blankenship, who spoke of his time leading the city and serving on council.

“Eight years of experience as mayor has given me a greater understanding of how government works,” he said, stating that he wants to make the entire county as business friendly as he made Ironton.

He also touted his work going to Columbus to get funding for the Ironton-Russell Bridge and for sanitation systems.

Republican Christopher Collins, who comes from a multi-generational political family, said “we need to strive to end division in the county.”

An Ironton native, he spoke of his experience working in Columbus as Senate page and later as a legislative aide to Senate President Keith Faber.

“These were experiences that enlightened me,” he said.

Collins said he believes the major concern in Lawrence County is jobs, and hoped to focus on that issue.

He said he had built key relationships with many state agencies throughout his work, and when addressing the drug problem, cited his work helping to draft legislation in Columbus on Vivitrol, an opiate reversal medication.

Challenging Boggs from the Democratic side of the ballot was Deanna Holliday, who cited the many roles she has served in, from “the CEO of three Lawrence County-based businesses,” to being a mother and, recently, a grandmother, work on the Dawson-Bryant school board to her time as Mrs. Ohio in 2012.

She said the reason for voters to consider her was their “mutual concern” for citizens and the community.

She said the office calls for a visionary with a plan for the future.

“I envision Lawrence County as a place where jobs are thriving and where we can feel safe in our homes,” she said.

The crowd also heard from Pike County Judge Paul Price, the Democratic candidate for the Fourth District Court of Appeals.

In addition to candidates in competitive races, the forum also hosted candidates who are unopposed for the ballot.

While he was unopposed on the ballot, Lawless said, to which many of the others agreed, that it was still important to vote in their races.

“That vote is a vote of confidence, and it means a lot to me,” Lawless said.

IT project source of budget boost Planned IT upgrades at the courthouse have enabled the Lawrence County Sheriff to get... read more