Riner ready to ride with the Knights 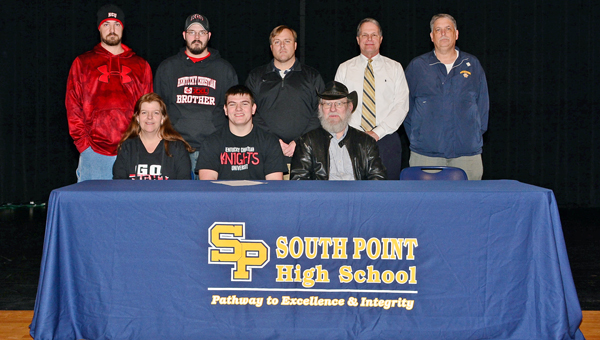 SOUTH POINT — Joey Riner is trying to get stronger, but he plans to remain flexible.

The South Point Pointers’ senior two-way lineman is not only hitting the weight room to get bigger and stronger, but he is keeping his position options open as he prepares for a college football career after signing with the Kentucky Christian University Knights on Thursday.

Riner is a 6-foot-1, 220-pound lineman who played guard and center on offense and defensive end, his projected position with the Knights.

“Playing several positions keeps things wide open and I can play pretty much any thing,” said Riner who is expected to play defensive end initially with the Knights.

“It depends where I play. If they need me to do this, I’ll do it. I’m here to do what they need.”

Riner — an All-Ohio Valley Conference honorable mention selection — said in order play defensive end he knows he has to improve his size and strength.

“I’m up to 220 now. I know I have to be bigger. Most of their defensive linemen are 250-plus and I should be 240. I pretty much live in the weight room now to get strong and to gain weight,” said Riner.

“The big thing right now this was coach (Steve) Barrows first year. He’s starting a new program with new coaches. The recruiting class so far and kids who have transferred in make for a pretty good program and they’ll compete.”

Riner plans to major in education with a major in Social Studies. Barrows believes Riner will have a positive impact on the program.

“We are excited to have Joey Riner join our university and football program,” said KCU head coach Steve Barrows. “He wants to be a teacher and a coach after graduation and I am confident he will be a difference maker in the lives of those young people under his care.

“We are looking forward to seeing Joey develop under our care and guidance as a Young man.”

After looking at several schools including Ohio Wesleyan, Cincinnati Christian and Glenville State, Riner made a visit to Kentucky Christian and fell in love with the campus.

“I had a friend at KCU and I got to go on campus and meet the players and talk to the coaches. It’s family oriented and everyone knows each other and it felt more like home,” said Riner. “The first visit made me realize this is where I need to be. I didn’t even look anywhere else.

“It’s a blessing. I always dreamed of playing in college and never thought it would come true. I just kept working until it came true. I know it’s going to be tough because they are grown men and some with families. There can be a huge age gap going up against them and there are so many different abilities.”

Getting an education remains the top priority on Riner’s list and he said KCU was the type of school and program that believed in the idea of a student/athlete.

“That’s why I’m going to Kentucky Christian. Football is great, but being able to have a class with no more than 20 kids means more one on one with the teacher. At a bigger school football is pretty much your life. KCU is focused on education. At KCU you go to school and get a degree,” he said.

Joey is the son of Barbara Edwards and Jim Riner. He has two brothers, J.T. and Matt.