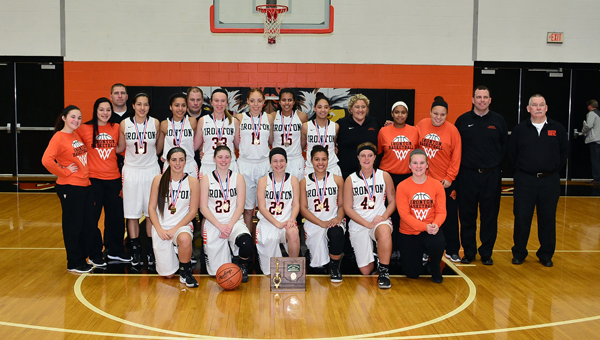 The unbeaten Lady Tigers kept their quest alive for a berth in the Final Four with a 49-36 win over the North Adams Lady Green Devils to capture the Division III district championship on Saturday.

Barrier scored 27 points, grabbed 13 rebounds had four assists and four blocked shots as Ironton built as much as an 18-point lead before settling for the 13-point win.

“I just knew I didn’t want to lose. You don’t want to go out your senior year, so it’s just more motivation for me to keep pushing,” said Barrier.

“We started slacking a little bit in the second quarter and a little in the third, but then we picked it up enough to get the win so I’m happy with it.”

By winning a second straight district title, Ironton (25-0) will now play Albany Alexander at 6:15 p.m. on Wednesday in the regional semifinals at Logan High School. Ironton won an earlier meeting at home, 67-33.

Ironton shot well early but finished the game 19-of-46 from the field and 2-of-12 from behind the arc.

The Lady Tigers roared to an 18-5 first quarter lead as Barrier scored 16 points and had an assist that gave Sydney Webb a basket to account for all the points.

But the shots stopped falling in the second quarter and North Adams was able to crawl back into the game. A layup by Madison Jenkins and two foul shots by Staci Dinsmore to end the half cut Ironton’s lead to 28-17.

“I thought we had make-able opportunities that we just didn’t capitalize. At halftime I said just take an extra half-second and knock it down. I know you’re capable of doing it,” said Graham.

Barrier scored seven points in the third quarter for a 35-23 lead and Webb drained a trifecta to push the lead to 38-23 at the end of the quarter.

After a layup by Avery Harper to start the fourth quarter for North Adams, Lexie Wise made two straight layups to put Ironton up 42-25.

Dinsmore made a layup to make it 42-27, but Webb delivered the dagger with another trey with 5:19 to play and the lead was 18.

“It wasn’t going in and I just kept shooting and it finally went in. I was praying,” said Webb who didn’t shoot well in the district semifinal game but finished with 10 points in the district title game.

Ironton’s defense limited North Adams to six points in the third quarter and the Lady Green Devils were just 8-of-23 from the field in the second half.

“That’s something we like to hang our hats on: play hard on a defense and limit them to one shot and transitioning down,” said Graham.

“It was a complete team effort. You can’t have just one or two good players to advance. You’ve got to have a team. Tonight we had a good team.”

Graham said one intangible that inspired his team was the crowd.

“Our girls were so impressed with the number of fans. They were so thankful that the people took time to come and watch. It really meant a lot to them,” said Graham.

Lady Dragons don’t do enough in loss to Mustangs

Jim Walker jim.walker@irontontribune.com   WAVERLY — The Fairland Lady Dragons made a “To Do” list and then lost it. The... read more