Patterson brothers will take a run at SSU track 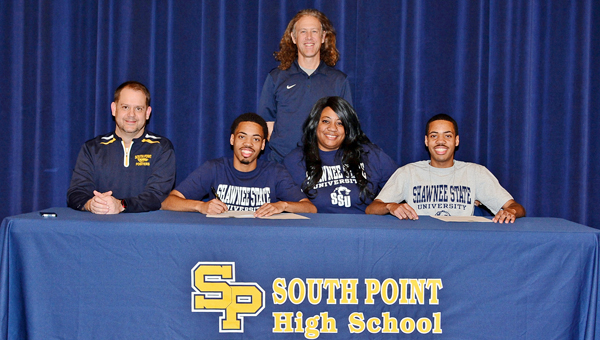 SOUTH POINT — It turned out to be a two-for-one sale.

When Shawnee State Bears’ coach Eric Putnam began putting together the blueprints for the new track program he knew there would be plenty of spots to fill.

The Patterson brothers will be on the ground floor of a groundbreaking track and field program.

Track has been a club sport for 12 years at Shawnee State but head coach Eric Putnam — who coaches a highly successful cross country program — is expanding the program for both women and men.

“We’ve been asked by the university to expand track and add some people for next year. Our indoor has always been a club sport. Next year it’ll be varsity for the first time ever and we’re excited about that.”

Putnam said the brothers are tentatively penciled in the 100 and 200 meters as well as the 4×100 and 4×400 relays. Regardless of the event, Putnam said they are in the plans from the start.

“We’ve been asked by the university to expand track and add some people for next year. Our indoor has always been a club sport. Next year it’ll be varsity for the first time ever and we’re excited about that.”

Getting to attend the same school and participate on the same track team prove to be a dream come true for the brothers who were born just 11 minutes apart.

“Three or four months ago we weren’t sure what was going to happen and then something popped up. My (South Point) coach (Todd Wells) called us single-handedly looking for us and he had our names written down and we went on one visit and just fell in love with the school, the coach. I’m just ready to for it honestly,” said Trent.

“I kind of did think about it. I mean, that’s my brother and two weeks is the longest I’ve ever been without him so I honestly don’t know what I would do without him. He’s like my best friend.”

His brother had similar feelings.

“It kind of came out of nowhere honestly, but I kind of like the fact my brother is going with me and he’s in the dorm with me. It’s someone I already know and don’t have to get used to,” said Trey.

The close-knit bond between the brothers has been with them their entire lives in everything they do, not just running track.

“I have a job at Taco Bell and (Trey) has a job right next door at Arby’s. We sleep in the same room. The longest we’ve ever been apart is maybe two weeks when he was born,” said Trent.

As for running at Shawnee State, the brothers are happy to get a chance to continue their careers.

“I feel really good about it.,” said Trent. “I’m kind of nervous, but it’s something I can push myself to do and work hard at it and pray about it. I’m ready to compete at the next level.”

Both brothers plan to major in Entrepreneurship.

“I want to do that. It’s been my mom’s dream, too, to open her own restaurant and I kind of want to make that come true for her,” said Trey.

Trent was on the same page with his brother.

Trent and Trey are the sons of Melanee Howard.

Jim Walker jim.walker@irontontribune.com   LOGAN — Walk, don’t run. That seems to be the hopes of the game’s tempo for... read more