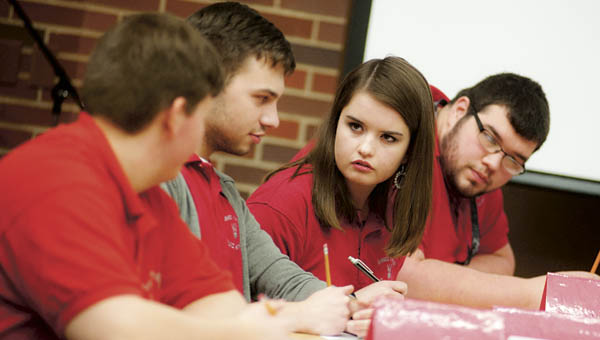 It took an extra round of playing, but Symmes Valley High School walked away as the winner of the Lawrence County Ironmaster Quiz Bowl Tournament at Ohio University Southern on Thursday.

The team went undefeated throughout most of the day, before facing off against Chesapeake High, who defeated them by only one point.

But, as Chesapeake had already suffered one loss in the double elimination competition, they had to play Symmes Valley again in order to defeat them.

Symmes Valley racked up a lead in the first round of the match, due in large part to the numerous correct answers coming from Felicity Jenkins, who had earlier been named as the team’s Outstanding Player of the Year.

Chesapeake did better in the alphabet round and lightning round to follow, but it wasn’t enough to make up the deficit and Symmes Valley took the match, 59-54.

Symmes Valley’s principal, Greg Bowman, has received word of how well his school had been doing and he made the trip down to watch them win the final match.

“I’m proud of the effort given,” he said. “The team’s done well all season, and they’ve done well for the Ironmaster. They’re a good group and they have a good coach. I’m really proud.”

Jenkins said she was pleased with how well the team worked together.

“It’s kind of a crowning achievement for my senior year for the team to finally win the tournament,” she said.

As a multiple-winning county spelling bee champ who went to the Scripps Howard National Spelling Bee in Washington, D.C, the win is another line for an extensive list of honors for her.

Cheapeake’s team of Cory Edwards, Chase Edwards, Evan Goodall, Austin Hutchison and Wes Stephens, will also be heading to the regionals, along with coach Gina Allen, due to the group being the regular season winner, with a 7-0 record in individual school-to-school matches held throughout the year.

“These students amaze me with their knowledge of everything,” Allen, who teaches Spanish at the school, said.

She said it was the first time in at least seven years, since she had been coach that the team had made it so far in the Ironmaster.

“I texted our principal and said ‘You would be so impressed,’” she said.

The Ironmaster is sponsored annually by Ohio University-Southern and the Lawrence County Educational Service Center.

EMS employees to get raise

Most runs go to KDMC Staff at the Lawrence County EMS is getting a 30-cent an hour raise following the... read more