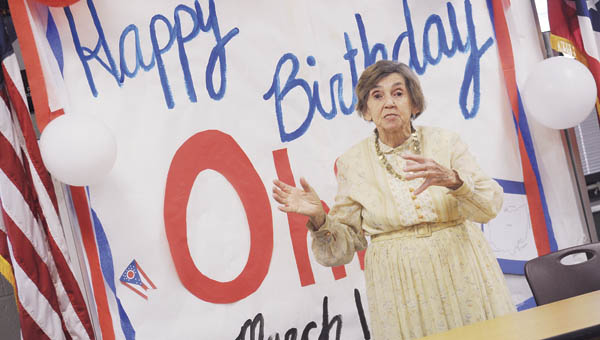 ROME TOWNSHIP — Students at Fairland West Elementary received a visit from the first lady of Ohio on Wednesday — except it wasn’t Karen Kasich.

Instead, the children heard from “Mary Tiffin,” who lived from 1762 to 1808. She spoke courtesy of Hanging Rock resident Jean Butler, who performed an impersonation of the wife of Ohio’s first governor, Edward Tiffin.

Dressed in full costume as Tiffin, Butler told the children about the life of the couple and the efforts by Edward Tiffin, who served as the first doctor in Chillicothe, to bring about Ohio statehood. When Ohio was admitted to the union, he was the immediate choice to serve as governor, holding office from 1803 to 1808.

Butler, a 1945 graduate of Rome High School, is a retired elementary teacher and performs as 14 first ladies, as well as various women from the Bible.

“I enjoyed teaching,” she said. “I always thought of the children as my own kids.”

In addition to the performances, she’s done work in genealogy and history and has written 19 books on several topics, including queens of England.

Butler’s appearance at the school was the second of the school’s two-day observance of the anniversary of Ohio statehood.

The school’s events were coordinated by Shawna Leep, who teaches fourth grade at the school.

She said Butler’s presentation was not only a valuable listening experience, but also was geared to the school’s social studies curriculum.

In addition to Butler’s visit, Leep organized 25-minute workshops in each classroom, and students would rotate and visit each one, where they would take part in activities.

She said they learned about businesses such as Bob Evans, who donated rolls for the event, and J.M. Smucker. They also got an up-close look at farming by seeing an egg incubator and learning how it works and why it’s needed.

The students also were treated to a birthday cake during their lunch period.

Leep said she wanted to provide students with a “hands-on” learning experience, rather than just “stuff to memorize for a test.”