Oregon, Virginia among tourney’s No. 1 seeds 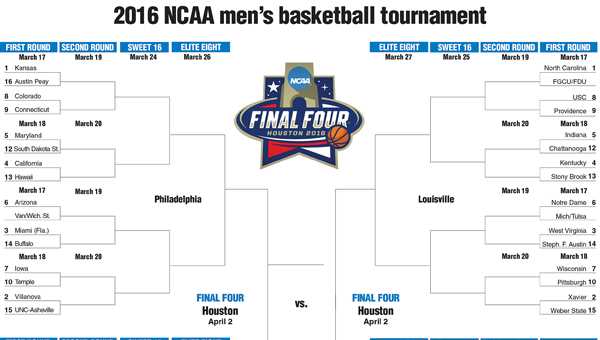 A topsy-turvy season in college basketball delivered a few more twists when the brackets came out Sunday.

Exhibit A: Oregon and Virginia are No. 1 seeds, while Michigan State is not.

Exhibit B: Monmouth and Valparaiso aren’t part of March Madness, but Michigan and Syracuse are.

As usual, the NCAA selection committee released a 68-team bracket with its fair share of surprises. This year, the debate started right away, when the committee named Pac-12 champion Oregon a top seed in the West, ACC runner-up Virginia a top seed in the Midwest and made Tom Izzo’s Spartans, champs of the Big Ten, a “2.”

They’ll decide it on the court, starting Tuesday with a pair of opening-round games. The main draw begins Thursday at eight sites. The Final Four is April 2 and 4 in Houston.

In a season in which six teams held the top spot in The Associated Press poll — one short of the record — there was no doubt there would be some debate about who belonged in the four top spots. That Big 12 and Atlantic Coast Conference champions Kansas and North Carolina earned two of the spots wasn’t that surprising. The rest of it raised eyebrows.

The head of the selection committee, Oklahoma athletic director Joe Castiglione, lauded Oregon’s third-rated strength of schedule (as of Sunday) and No.2 ranking in the RPI, along with its regular-season and tournament titles in the Pac-12. He said Michigan State was the fifth overall seed.

“Very close. It was a vigorous debate,” Castiglione said. “We know how good a team they are. … It was just a close call and the committee felt Michigan State was fifth.”

But there were no easy choices for the committee this season, and the way the big slate of conference tournaments played out only emphasized the way this season has gone. Of the 31 postseason tournaments, top seeds only won 10.

That gave automatic spots to bubble teams (or less) such as Fresno State, Gonzaga and Connecticut, while squeezing out a few spots bubble spots — even though there were two more available this season because Louisville (and Rick Pitino) and SMU (and Larry Brown) are both ineligible.

Among those sitting out include Monmouth, which played a killer nonconference schedule but lost too many games to bad teams; St. Mary’s, which won the regular-season title in the West Coast Conference but didn’t play a tough enough schedule; and Valpo, which ranked 49 in the RPI but had only four wins against top 100 teams.

Of the at-large teams, 25 came from teams from the Power Five conferences, with 11 from the smaller conferences. Of the last eight teams to make it, the count was 4-4, with Michigan, Vanderbilt and Syracuse among the most hotly debated among the bigger teams.

“In the past, the committee has taken teams with wins, especially road wins,” said Syracuse coach Jim Boeheim, whose team’s wins away from home against Duke, Texas A&M and UConn made up for the fact that the Orange (19-13) has lost five of its last six. “I’m not sure there’s anyone on the bubble who had as good of road wins as we did.”

Boeheim missed the first nine games of the season, while serving a suspension for committing NCAA violations, but Castiglione said that didn’t much factor into bringing Syracuse in.

Castiglione said the last bubble team to make it was Tulsa, which plays Michigan on Wednesday.

Other notables from the bracket:

KENTUCKY: Two things stood out about the Wildcats. First, their possible second-round matchup against border rival Indiana, a team they don’t schedule in the regular season. Second, their No. 4 seeding, one spot worse than Texas A&M, the team the Wildcats beat in the SEC tournament title game. Coach John Calipari was outspoken, as usual: “Did we not play a basketball game against them today?” Calipari said. “When you mis-seed a team, it’s not the team you hurt, it’s the teams they play that you hurt. But at the end of the day, they’re not stealing my joy.”

KANSAS: If there’s a favorite in this year’s tournament, it’s the Jayhawks, who won both the regular-season and tournament titles in the nation’s toughest conference, and also come in on a 14-game winning streak. “You obviously have to be healthy, catch a few breaks and have your best players perform,” said Jayhawks coach Bill Self. “With most teams, it comes down to making shots. That’s as big a key with us as any.”

FUTURE PROS: The mock drafts project Ivan Rabb and Jaylen Brown as potential top-10 picks later this year. Both play for Cal. So, did the fourth-seeded Bears underachieve by going 23-10 and finishing tied for third in the Pac-12? We’ll find out Friday when they open against No. 13 Hawaii. Other tournament players who could be starring on an NBA team near you: Brandon Ingram (Duke), Kris Dunn (Providence) and shooting guard Buddy Hield (Oklahoma), the nation’s second-leading scorer at 25 points a game.

UCONN, UCAN?: When UConn won the title two years ago, the Huskies were a bubble team that caught fire at the right time. Sound familiar? Courtesy of the 70-foot miracle shot by Jalen Adams that pushed the conference semifinal against Cincinnati into a fourth overtime, the Huskies didn’t have to sweat Selection Sunday. They’re a No. 9 seed (they were a ‘7’ in 2014) and will open against Colorado, with a possible meeting against Kansas up next.

WELCOME BACK: Oregon State is back in the tournament for the first time since 1990. Last time the Beavers made it, Gary Payton was closing out a college career, about to be an NBA star. This time, it’s Payton’s son, Gary Payton II, leading the team into the spotlight. Payton II is averaging nearly 16 points a game for Oregon State, a No. 7 seed that faces No. 10 VCU on Friday.

Jim Walker jim.walker@irontontribune.com   COLUMBUS — The Ohio State Buckeyes knew there was a very small chance of getting an... read more