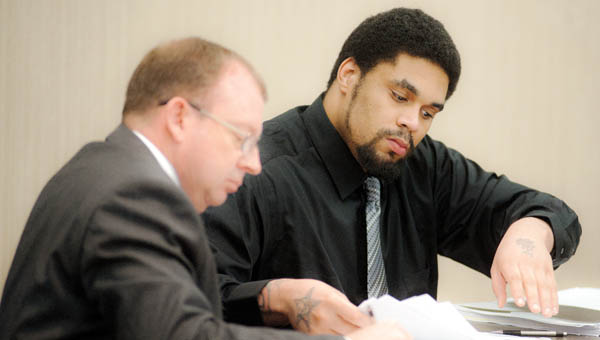 A long line of witnesses testified during the second day of a murder trial Tuesday in Lawrence County Common Pleas Court.

The first was William Derek Rice, a co-defendant in the case who said Justin Wilson offered to help pull off the robbery of the victim, Justin Adams.

On the day of the shooting, Rice said he saw Adams, Wilson and Nicole Eller, another co-defendant who testified Monday, together in the afternoon.

Some time later, Rice said Eller texted him with the idea to rob Adams of his money and drugs. Rice said he called Wilson and Wilson offered to help with the robbery.

Later in the evening, Rice said he and Wilson arrived at the residence.

“I go in the house, Justin Adams was there with Nicole,” Rice said. “Adams had the money out. I didn’t take it then. I should have.”

Rice said he and Eller smoked some crack in his bedroom, then returned to the living room where Adams was. Rice said Wilson pulled a gun and started fighting with Adams, but Wilson told him to get back.

Rice said Wilson hit Adams with the gun several times before pushing him on the couch where he shot him.

Rice testified on cross examination that he took the money from Adams and gave $100 to Eller, keeping $50 for himself, which he used to buy drugs and cigarettes.

Gene Meadows, attorney for Wilson, asked Rice if he wanted a gun because he knew Adams wouldn’t give up his money or drugs.

“You wanted to kill Adams didn’t you?” Meadows asked.

“Come on man, cut it out,” Rice said. “… What satisfaction would I get from killing that dude?”

Lawrence County Sheriff Detective Jason Newman also testified. Newman interviewed Rice and Eller before and after their arrests. He also interviewed Wilson after he was arrested in Huntington about two weeks after the shooting.

An audio recording of that interview was played for the jury.

“Before I come over there I want to drop my strap (gun) off at my house,” Wilson said of his conversation. “I got this real odd feeling and I kept my gun on me.”

At the residence on Township Road 616, Wilson said Adams pulled a knife on him and Rice had a gun. He said he was afraid they were going to rob and kill him.

That’s when Wilson pulled his gun.

“I just pulled it out and shot and ran,” Wilson said. “I’m not trying to hit nobody. I’m trying to scare them so I can get away.”

Wilson ran and said he disassembled his gun and tossed it.

Also to take the stand was Angela Bailey, of South Point.

Bailey said she dated Wilson off and on and the two have a child together.

On the night of the shooting, Bailey said he arrived at her home between 6:30 and 7 p.m. because she asked him to watch the children because she was sick. She said he received a phone call from whom she assumed was Rice.

Bailey said Wilson left and returned about 15 minutes later and he was jittery.

“I asked him what was wrong,” she said. “He said he just shot somebody in the face.”

Wilson left about 25 minutes later in a cab, Bailey said. That’s when she called the police.

Donna Thompson, who worked for Safeway Taxi at the time of the shooting, said her first ride that night was Wilson, whom she picked up in South Point and dropped off in Huntington.

“He got on the phone and I heard him saying he done something really, really bad and he didn’t want to talk about it on the phone,” Thompson said.

Other investigators from the Ohio Bureau of Criminal Investigation took the stand as well, including Andrew McClellan, a firearms examiner; Manuela Bianco, a criminal intelligence analyst who was asked to analyze phone records in the case; and Devonie Herdman, a forensic scientist in DNA division.

SOUTH POINT — North Kenova Road in South Point will be closed from March 28 to April 1 as crews... read more