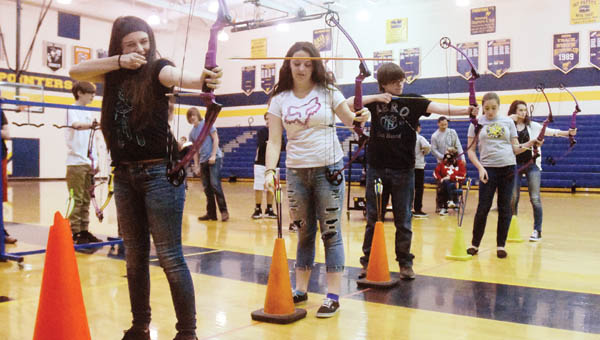 South Point High School students participate in an archery class Friday afternoon. The equipment needed was sponsored though a grant from the Ohio Division of Wildlife.

SOUTH POINT — For the past few weeks, students at South Point schools have been trying to hit the bulls eye.

The high school, middle school and both elementaries have introduced an archery program as part of physical education classes.

Travis Wise, the physical education teacher for the high school, said the program at the high school came thanks to a grant from the Ohio Division of Wildlife and funding from the school, totaling $2,500.

Wise said archery has been very popular with both male and female students excelling.

“The first day, we went over the rules,” he said. “Then we started doing tournaments. In our first tournament, a guy and a girl were the finalists. And a girl won for the class.”

He said, after a rocky beginning, the students quickly mastered the skill.

“For the first few days, we had arrows hitting the wall and backdrop,” he said. But after that, they got the hang of it.

On Friday, students lined up in groups of five to take aim at the targets, with nearly every shot hitting the targets, and many making bulls eyes.

Wise pointed out Hannah Wade, a tenth grader in the class, who had been doing especially well.

Ninth grader Chase Jobe said that he and Wise had been topping each other since the program started.

Jobe said he had never shot a bow before doing so in class.

Wise said that each of the school’s physical education classes is doing the archery unit. To teach the subject, he had to complete a certification, which he did with a teacher from Coal Grove, where they also have the program.

Wise said he likes to have the students try different things, instead of traditional sports like basketball. He said, in addition to archery, the students will be doing cornhole and badminton.

He said the archery program is particularly popular in across the river in Kentucky schools, and he hopes that, as it take off at South Point, he can eventually organize tournaments between high schools.

I would like to take this opportunity to express my gratitude to all of those who came out and supported... read more