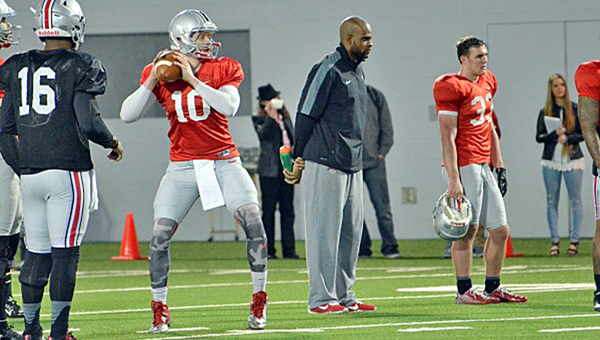 COLUMBUS — Coach Urban Meyer said the heat is on.

No, Meyer isn’t referring to the warming temperatures outside but rather the pressures that are being applied to a lot of Ohio State players who don’t have much playing experience but will have to step in and play this season.

The Ohio State fifth-year head coach said he plans to apply pressure on the players and he expects his coaching staff to be the ones turning up the temperatures.

The Buckeyes have only 28 returning scholarship players and will have 17 incoming freshmen.

“There are some guys who haven’t done a whole lot who are going to have to play,” said Meyer. “So we try to put as much pressure on the players now because it’s not fair to put pressure on them in October.

“I hope there was more pressure on them (today) in their first padded practice than there is next fall in front of 110,000. But that’s our job to make it stressful. There are a lot of great athletes who don’t respond to stress very well.”

Ohio State had spring break last week so the players returning to school this week were greeted with a grueling practice on Monday that last more than two hours.

“We ran them pretty good yesterday. They were good today,” said Meyer.

Ohio State is coming off a 12-1 season that saw them lose at home to eventual Big Ten champion Michigan State 17-14 in game 11 that spoiled their perfect season.

Coming off spring break that saw most players go home to visit while others headed for Florida, Meyer commented on the idea of using spring break to take the team to Florida for practices.

Michigan coach Jim Harbaugh took his team to Florida during spring break for workouts and Meyer was asked if he would take his team in the future.

“I didn’t make comments. Someone asked me a question of would we look into it. We look into everything but I can’t see taking spring break away from the players,” said Meyer.

The Buckeyes will be off on Wednesday and return to practice on Thursday morning.

Fourth-year junior J.T. Barrett — 15-2 as a starter — is listed as the starting quarterback but Meyer said no one has been penciled in as the backup but former Athens High School standout Joe Burrow will get a good look.

The Buckeyes will have a scrimmage on Saturday and Meyer said he was anxious to see the red-shirt freshman quarterback in action.

Burrow played at Athens High School and led the team to the Division III title game before losing.

Brionte Dunn and Mike Weber are the main candidates to replace running back Ezekiel Elliott.

The Scarlet/Gray spring game is scheduled for Saturday, April 16.