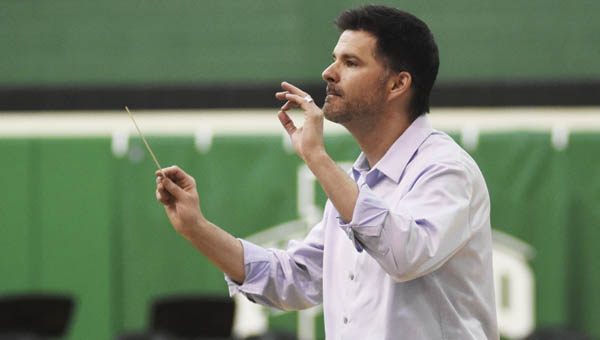 The show featured two groups of students, about 80 each, from county high and middle schools, who were selected after passing an audition in January.

Carper said the students received their music in advance of the concert, then came together as a unit for the first time to practice on Monday evening. They spent the entire school day on Tuesday rehearsing.

“It’s going to be a good concert,” he said” listening to the morning rehearsals.

The middle school students were conducted by John Johnson, the director of bands at Boyd County high School in Ashland and the founder and director of the Bluegrass Wind Ensemble and the Boyd County Community Band.

Johnson was working with the students throughout the day in the band room, in preparation for the show, fine tuning the performance.

At one point, he stopped to advise them to play the piece more smoothly.

“If I…made….pauses…while…I…spoke, it would be weird,” he said. “We don’t want to do that when we speak musically.”

Down the hall in the gymnasium, the high school students were being conducted by Dr. Jeff Gershman, the director of wind ensembles and an associate professor at the Capital Conservatory of Music in Columbus.

“It gives students an opportunity to play with other good musicians,” she said. “It’s a great experience for them.”

Following the two days of rehearsals, the students performed at the school Tuesday evening for the concert, which was free and open to the public.

Shooter gets life without parole

Mother of victim speaks during sentencing hearing The mother of a man who was murdered last year said she and... read more