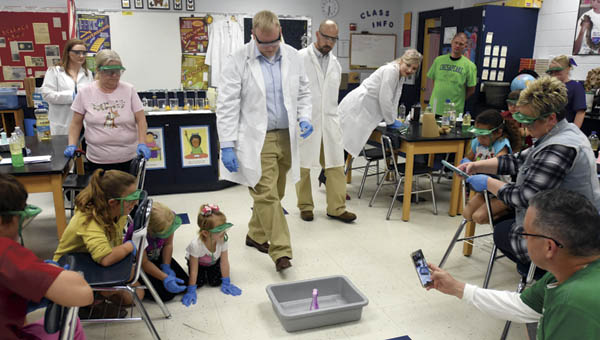 Nearly 500 students and parents took part in the three-hour event, which was organized by science teachers at the middle and elementary schools.

About 50 high school students taught 15 workshops throughout the building, where the younger students got an opportunity for hands-on learning, doing things like making glue, invisible ink and sidewalk chalk, building hovercrafts and building devices to drop eggs without shattering them.

Two of the student instructors, Kent Picklesimer and Caleb Darnell, both of the 11th grade, were teaching the children how to make toothpaste.

“It takes a small amount of salt,” Darnell said, adding that baking soda, glycerin and orange extract round out the ingredients.

“We’ll be teaching kids how to make ice cream, too,” Picklesimer said.

Shaden White, a Chesapeake High senior, led a session in which parents and children were asked to build a giant golf tee from recycling newspapers.

“It has to be tall and free standing and be able hold up a golf ball,” he said.

The engineering students conducted a competition to build the highest tower composed of sticks of spaghetti and gumdrops, while biomedical students explained the workings of the eye by dissecting a cow’s eye.

Another workshop came courtesy of the University of Rio Grande.

Professor Jacob White, along with three chemistry majors from the university, Halley Alberts, Michael Moore and Chobee Sheets, shared their knowledge of the subject in two sessions with students.

“We’re doing a few demonstrations and activities that students and parents can do at home,” White said.

White kicked the session off by creating a loud spark by striking aluminum and rusted iron together.

Sheets showed the children how to create a homemade lava lamp, by filling a bottle with water and vegetable oil, food coloring and adding effervescent tablets. The release of carbon dioxide from the tablets, combined with the density of the oil, created the effect.

Alberts did a demonstration using an acid base indicator, changing liquids to all the colors of the rainbow, while Moore walked the students through the “elephant toothpaste” experiment, in which a tower of foam is created by adding yeast as a catalyst to accelerate the decomposition of hydrogen peroxide.

In the halls, microscope stations were set up where people could look at human blood, cheek cells and other items, while science documentaries played in the school’s cafeteria.

The school’s gymnasium hosted two of the night’s biggest draws — a robotics show from Madison, Wisconsin, and a visit from the Columbus Zoo. Animal program specialist Calvin McCammon gave two presentations, featuring an African penguin, a sloth, baby African serval cats, a palm civet, an armadillo and a cheetah, to a packed house.

Chesapeake Middle School science teacher Julie Byers, who had been planning since October, said things were “busy and exciting.”

She said she was happy that the students from the high school had gotten involved, expanding the event.

“Now it’s a district thing and not just a middle school thing,” she said. “The high school kids are committed and they’re running the show.”

Jail doctor contract gets approval A record first half property tax collection will bring in close to $1.6 million to... read more