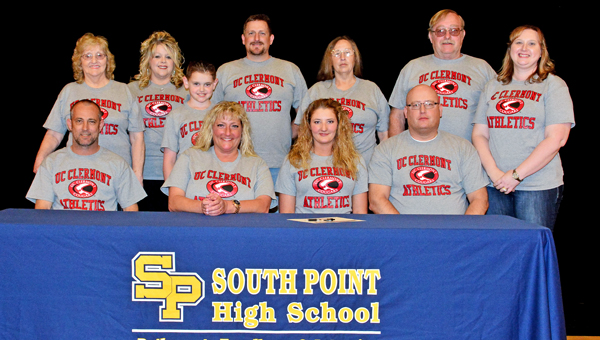 Not only does the South Point Lady Pointers’ senior volleyball standout like her sports to move fast, but her thinking and decision making move quickly as well.

When Abner was looking for a place to play college volleyball, it didn’t take long to make a decision.

After her first college visit to Grace Bible College in Grand Rapids, Michigan, and contacts with schools in Illinois and Minnesota, Abner stumbled upon the University of Cincinnati-Clermont and she made her choice official by signing a letter-of-intent on Thursday.

“I went to a tournament and UC was playing and I went to visit the coach and I got to sit with the girls and something just clicked. I just really liked the team. So I went up and visited and I just fell in love,” said Abner.

“Volleyball is my favorite sport honestly. I just like your adrenalin rushes. It’s fast-paced, it’s a quick-thinking game, and it’s a good trusting game. You are so involved with these girls so much it’s like family,” said Abner.

“I went to (a Clermont) open gym and it’s so much faster than high school. I loved it though. It’s fun.”

The 5-foot-11 Abner is expected to be a middle hitter since the Lady Cougars will return three outside hitters.

“I don’t care where as long as I get to play,” said Abner who has played since seventh grade.

Along the way, Abner said she has had plenty of support and encouragement both in the school and on the court, especially Lady Pointers’ head coach Allen Perry.

“A lot of people have pushed me and made me strive to be the best that I can be. Mainly my family and my coaches (have been an influence). Mr. Perry has helped me push. My very first volleyball coach Mr. (Paul) Bruce did really good, and Mr. (Dave) Adams always said to do the best you could, so I’ve had a lot of influences,” said Abner.

The most important decision Abner has to make is a major, but this time she is wisely taking her time.

Abner said originally that she had three different interests but has whittled the choice to veterinarian or athletic trainer.

Fortunately for Abner, UC-Clermont has all the programs that peak her interest.

“I’m just trying to crunch time and get what I want to do,” said Abner.

UC-Clermont also offers Abner that chance to be close to home but still provide a buffer.

“I like how it’s different. It’s not far away but I’m not close enough to where I’m out back of my house. If I ever need anything I can get home. It’s like a good, little getaway,” said Abner.

Olivia is the daughter of Mica Burns and Nathan Abner.

PEDRO — The annual Rock Hill Redwomen “Queen of the Hill” softball classic will be held on Saturday at the... read more