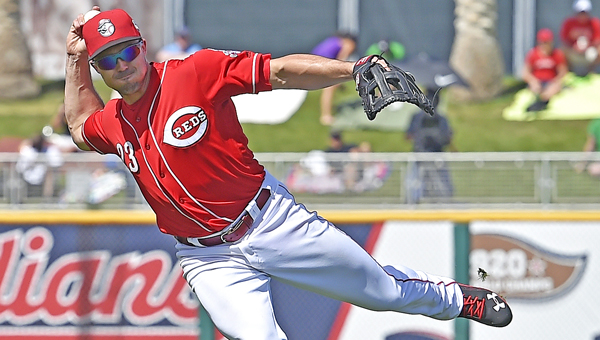 Cincinnati Reds’ Adam Duvall throws out a runner during a spring training game. Duvall hit a three-run homer and drove in four runs as the Reds beat the Milwaukee Brewers 9-2 on Tuesday. (MCT Direct Photos)

PHOENIX (AP) — Adam Duvall hit a three-run homer and drove in four runs as the Cincinnati Reds beat the Milwaukee Brewers 9-2 on Tuesday.

Duvall’s ninth-inning homer cleared the 30-foot high batter’s eye more than 400 feet from home plate at Maryvale Ballpark. He added a RBI single in the fourth and is hitting .328 in the Cactus League.

Jordan Pacheco had a single and an RBI double before following Duvall’s homer with a solo homer in the ninth inning to raise his average to .326. Scott Schebler had three hits and an RBI for the Reds.

Duvall, Pacheco and Schebler are all competing for jobs and continue to impress manager Bryan Price as the final roster decisions approach.

“I love seeing that,” Price said. “They’re pros about how they’re going about this. There is pressure that goes with this. Those guys want to make the club. I think they’ve handled it beautifully. All three of those guys are in strong consideration to make the club.”

“It can happen any day. I’ve made three errors on this field,” Counsell said. “It’s a bad day and you don’t want it to happen, but you chalk it up.”

“I thought his sinker was really good. This is two starts in a row where he’s had his really good stuff,” Counsell said.

Aaron Hill, who came into the game with six hits in 43 spring at-bats, had three hits for the Brewers. Ryan Braun, who sat out for a week with soreness in his surgically repaired back, was 0 for 3 with two strikeouts in his return to the lineup.

Reds: A.J Morris allowed three hits and struck out four in 3 1/3 innings. The Reds are still searching for starting pitching depth and Morris didn’t hurt himself, dropping his spring ERA to 1.54.

Ross Ohlendorf, who signed with the Reds on Saturday to provide bullpen depth, pitched for the first time with his new team and allowed one hit while getting two outs.

Brewers: Peralta is scheduled to face Madison Bumgarner and the San Francisco Giants on April 4 at Miller Park, his first opening day assignment.

“It’s a different day. The crowd is excited and we’re excited,” he said. “You want to get that first win and get things going in the right direction. You have to pitch the same way, focus and execute and not let all the other stuff affect you.”

The 26-year-old Walsh had waited a long time to be told he had made a major league club. But what should have been a great day turned sour when he was thrown out trying to steal in the first, committed two errors in the fourth and a third on a ball that rolled between his legs in the fifth.

“It was a tough day,” Walsh said. “None of them were easy groundballs, different hops. You still have to make the play. When the (errors) come, they come in bunches, so hopefully I’m done with them for a while and I left them all in Arizona.

“Three grounders in a row. Usually I make all of those plays. Today I missed all of them,” he said.

Brewers: Counsell is still confident Braun will be in the lineup on opening day. Braun had seven at-bats in four games before reporting problems with his back.

Reds: Josh Smith with start against the Chicago White Sox in Goodyear.

Brewers: Ariel Pena, trying to earn the final open spot in the Milwaukee bullpen, will start against the Colorado Rockies in Scottsdale. No. 2 starter Jimmy Nelson will also pitch.