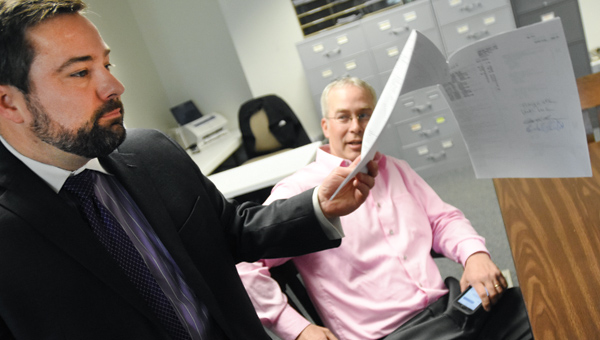 Operator error in tallying the vote in eight precincts inflated the election night results for Dave Lucas, who was looking to unseat commissioner Bill Pratt for the GOP nomination according to the board of elections.

That night, Lucas was the unofficial winner, but with only a 15-vote margin, which made it possible there could be an automatic recount.

However, after the Lawrence County Board of Elections made its official canvas on Tuesday, Pratt was declared the winner of that race and there will be no automatic recount.

“On election day it is apparent when they began reading in the data, the individual double-clicked in eight precincts,” Mark McCown of the board of elections, said. “As a result, it doubled the error in the unofficial results.”

Those precincts were in Hanging Rock, Symmes Valley, Washington Township and five in the VFW 8850 in Ironton.

Those results are not within the one-half of one percent to force an automatic recount. However, Lucas can request one within five days, for which he will have to pay.

“I don’t know how much something like that would cost,” Lucas said “I plan to meet with the board sometime Monday and go over everything. We are disappointed and a little shocked to say the least. Naturally I have some questions. I am little curious modern technology could accept results twice. It doesn’t make sense. Why wasn’t the error detected immediately? These are questions best posed to people with the information. I will know a lot more and be more settled in my mind after I chat with the board of elections.”

Added to election night totals on Tuesday were 184 provisionals, 21 votes cast by 17-year-olds that were segregated until the canvas and 17 absentees that were postmarked on election night eve, but not received by election day.

“To be involved in a historical race is amazing,” Pratt said. “It is pretty humbling to be in the spot I was in and come out on top. It makes me feel I have support in the county. I am confident we can move forward and serve another term.”

This year’s primary brought out an unprecedented number of voters on the Republican ballot.

At the polls 8,491 registered Republicans voted but 4,067 others also requested a GOP ballot.

In anticipation of a large turnout, the board took the election with the largest number of votes cast over the past eight years, then added another 20 percent, to determine how many ballots to print. Even with that, polling places ran out of ballots.

One place was at the Chesapeake Community Center, where there was a reported 20-minute wait for board runners to get more ballots there.

A runner checked in with poll workers there who thought they had enough ballots. But then they realized after the runner left that what they had were packets of Democratic ballots.

“So there cannot be that error, we are going to ask our ballot vendor to physically insert a brightly colored slip that, if you see this, call the board,” McCown said. “It shouldn’t have happened.”

The only other race affected by the canvas was the local option in Burlington 3 where the vote was tied. Since it was an option, it had to be approved by the voters. As it was a tie, it did not pass.

There will be a recount on Monday.