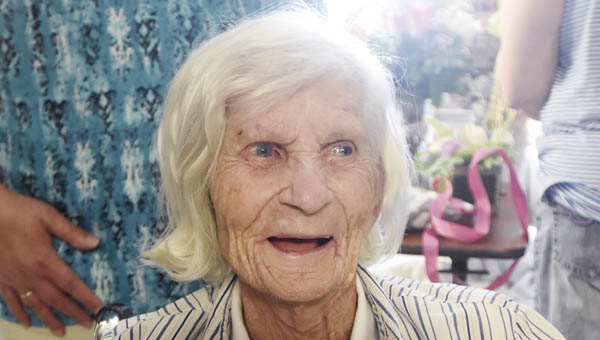 COAL GROVE — About a dozen family and friends gathered on Wednesday at Crystal Care Nursing and Rehab Center to help a local woman celebrate a special day.

Adkins, the daughter of Winchester McCloud and Maggie Watts McCloud, was born and raised in Wayne County, West Virginia, and spent most of her life in Huntington, where she worked as a waitress.

The widow of Willis Adkins, she was married three times and had five children, Ollie, Sheila, Joe, Donald and Leeona.

She’s lived at the nursing facility for the past three years.

Tina Baldwin, activities director, said Adkins is in good health and participates in many of the center’s events.

“She loves to listen to the entertainment when it comes here,” Baldwin said. “She loves music. She also love to attend bingo, and she loves to sit outside when the weather’s nice.”

She said that Adkins goes on outings with the home’s residents, likes to work on flower and vegetable gardens and to crochet.

Her niece, Betty Price, said Adkins had always liked to make crafts and to take a lot of walks.

“She walked everywhere she went,” Price said. “Her doctor said that’s probably the reason she lived to be 100.”

Wiley Dew to perform at RO-NA