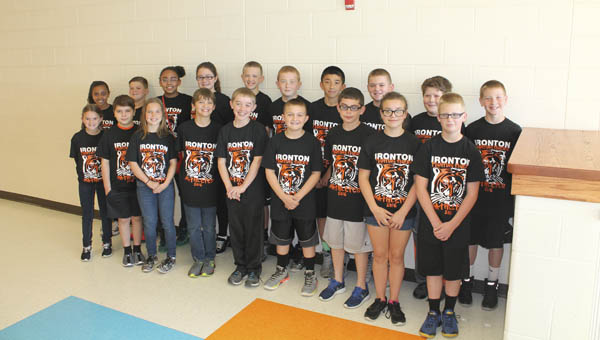 When Lesile Kerns began teaching fifth grade math at Ironton Elementary School four years ago, she heard about a math competition and immediately took action by forming a Matheletes team.

Each year, the Department of Mathematics and Statistics at Wright State University and the Korean-American Scientists and Engineers Association (KSEA) Dayton Branch host the Ohio Math Contest in April at Wright State.

“When I started here, I heard about the competition through an email ad. I asked Principal Maynard if we could go and he said to get a team together,” Kerns said. “Our Matheletes team is taken from tests throughout the year. I take quarterly assessments to track progress and pick the top performing math students.”

Kerns taught at Ohio University Southern for eight years before arriving at Ironton Elementary School. She also was a graduate assistant and taught classes at Marshall prior.

“The kids work really hard. Most of it is college grade level, but all of it is well above their grade level,” Kerns said. “The fifth grade test is 60 minutes, and we’ve met twice a week since around October.”

The Matheletes team of 19 students attended the Ohio Math Contest at Wright State on Saturday, April 9, where three students from the team, Ava Webb, Ethan White and Jones Taylor, earned honorable mention for placing in the top 10.

“I didn’t think I was going to place or get honorable mention,” White said. “It feels pretty great.”

Webb said she enjoys being a part of the Matheletes team and also wasn’t expecting an honorable mention finish.

“It’s fun,” she said. “You get to learn more than I expected. I didn’t think I was going to get honorable mention, but I did and it was surprising.”

Jones said the trip to the competition was enjoyable.

“I liked the trip up to Dayton,” he said. “And I was happy to get honorable mention.”

All three also said that math was their favorite subject.

Besides the math test, the competition also features several workshops for the students and parents.

“I use this competition as a way to help motivate the students to reach beyond their grade level requirements and start exploring new concepts,” Kerns said. “I’m thankful I work for a school district that supports academic competitions such as this one. Our principal, Mr. Maynard, and superintendent, Dean Nance, have always encouraged and showed great pride in our Matheletes team and their efforts.”

Mary Cooper serves up a plate full of ramps during the annual ramp dinner Saturday at the Proctorville VFW 6878.... read more