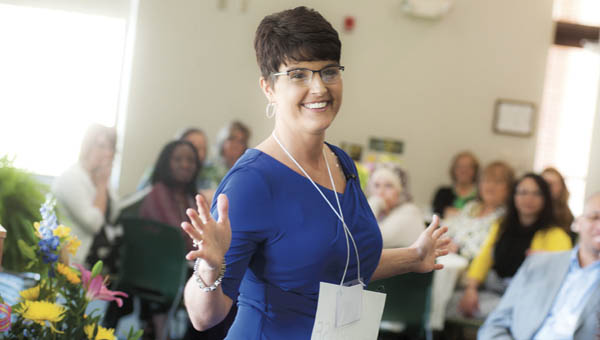 More than 120 people turned out on Friday for the Women’s Conference at Ohio University Southern’s Proctorville Center.

The sixth annual event featured a host of speakers and presentations on various topics.

“It’s an opportunity for networking and to show what women in the community are doing,” Dr. Kristi Barnes, of the psychology department, who chairs the event, said.

Some speakers were chosen because of their inspiring life story, such Joan C. Browning, who was a Freedom Rider during the civil rights activism of the south in the early 1960s.

She opened the conference by relating her experience in the efforts to bring about voting rights and desegregation, as well as her activism for women in West Virginia.

Others spoke on topics that could be applied to every day life.

James Stephens, the director of law enforcement technology for OUS, used his 22 years of work experience to teach about situational awareness, which he described as “training the mind to become a little more safe in life.”

Stephens said that being mindful of one’s surroundings can aid with personal safety.

He said to be aware of signs and behaviors in people, such as learning the difference between “chit-chat” and someone trying to acquire personal information.

“If someone starts trying to dig into your information,” be very careful,” he said, comparing conversations to phishing email scams.

In being mindful of places, Stephens said to take into account things in the environment, such as where the exits in a room or building are or practicing behaviors such as walking on the outside of corners to increase safety.

He said to be aware of potential dangers in one’s environment, whether in the form of animals or drivers who may be texting.

It’s also important to reduce reaction time, he said, focusing on an “when/then” mentality, instead of an “If/then” approach in preparing for potential dangers.

One should not dismiss intuition or try to rationalize valid concerns, he said.

“Please, if you take anything from this – do not suppress your feelings. Act upon them,” he said.

The conference also gave female professionals a chance to talk about their experience.

Judy Eaton is a staple of radio in the Tri-State, having worked at WTCR for 26 years. She currently co-hosts the “Cledus T. Party” in the mornings with comedian Cledus T. Judd.

During her presentation “Broad-casting,” she spoke of her early work for the station, doing sports reporting and being part of a three-woman news team.

“It was mostly guys when I started,” she said of the business.

Eaton said her favorite thing about her job is getting to do charity events, such as the Radiothon, which has raised thousands for St. Jude Children’s Hospital or the stuff the bus heart walk.

And she shared stories of meeting country music stars such as Taylor Swift, Clint Black, Shania Twain and Brad Paisley when covering the Country Music Awards with the station.

“Most of them are the same onstage as they are in person,” she said.

Her best advice to anyone is to “find a good mentor,” Eaton said, having been blessed to co-host for years with longtime radio personality Chuck Black, who died in 2013.

“He was great,” she said. “Find someone who knows what they’re doing and has done it for a while.”

Of her job, she said there is a lot of time and effort involved.

At lunch, Dyer presented the year’s leadership award to Mary Cogan, for her work as a member of the South Point council, with People for the Point, the Sybene-Chesapake Senior Center and other community groups.

Then Ironton Mayor Katrina Keith addressed the gathering, serving as keynote speaker for the conference.

Keith said, when she was younger, she was hampered by fears of how the world perceived her.

“I was fearful because I wasn’t confident in myself,” she said. “And that fear birthed low self-esteem.”

She said low self-esteem led to bitterness, which led to jealousy.

Keith said it was “a personal journey” to overcome her fears, build self-esteem and find her purpose, something she credits to her Christian faith.

She said the key was for “the mind, body and spirit to be working simultaneously.”

With her purpose revealed, Keith said it was her “calling” to run for mayor of Ironton.

“I knew I heard, ‘This is your time. I’ve been preparing you for this,’” she said.

Keith’s passionate speech drew a standing ovation from the audience.

“Thank you to the countless women who invest in our community, she said. “Ladies, do what you are called to do. Do not let current circumstance dictate your situation.”