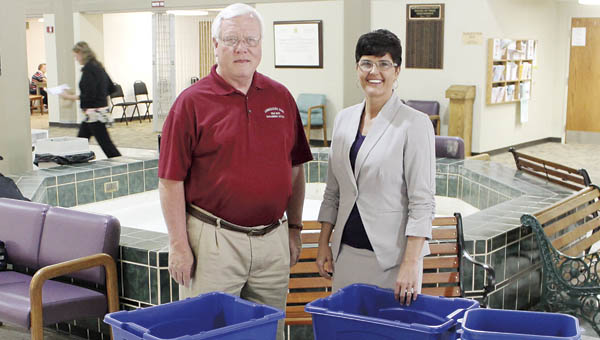 Dan Palmer, Scioto-Lawrence Solid Waste Management District coordinator, and Ironton Mayor Katrina Keith stand with the new recycling containers the Ironton City Center has received. The center is one of the newest recycling locations for the solid waste district.

The Ironton City Center is one of the newest recycling locations for the Scioto-Lawrence Solid Waste Management District, receiving 23 containers to be distributed throughout the building.

Along with the Ironton City Center, which received 23 containers, the other new locations include the Scioto County Courthouse and Portsmouth City Hall. Palmer said the district is also in the process of getting the Lawrence County Courthouse on board, which would make 39 total recycling locations.

“These are all government buildings and we believe these buildings should be recycling anyway,” Palmer said. “I’m pleased that the mayor has accepted.”

Ironton Mayor Katrina Keith said she’s happy the center is a part of the recycling efforts.

“I wanted to do what we can to save our natural resources,” Keith said. “With the tonnage we take to landfills, this will also help save the environment.”

Keith will distribute the center’s recycling containers throughout the departments in the building before possibly expanding to other city departments outside.