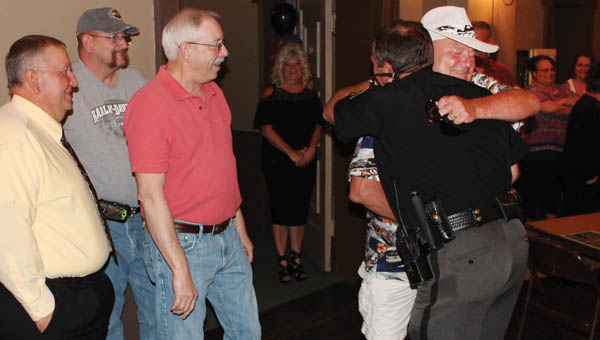 The Miami Vice theme played as Sgt. Randy Goodall walked into the Ironton Elks Lodge Thursday for his retirement party.

Family, friends and fellow deputies gathered to celebrate the career of Goodall, who spent 33 years at the Lawrence County Sheriff’s Office.

Sheriff Lawless welcomed everyone to the party and thanked those who were part of putting it on. A buffet style dinner followed before a picture video was played of Goodall through the years and speeches by Lawless, other deputies and Goodall.

“Randy’s been a solid rock for the agency for many years. He started three years before I did and I learned a lot from him as I came up through the ranks,” Lawless said. “He continued to be a loyal friend to me and he’s well versed in many topics. We’re going to miss him.”

Goodall said he enjoyed his time at the sheriff’s office, but is looking forward to retirement.

“I’m looking forward to spending more time with my family. Now there’s time to enjoy a little more of each other,” Goodall said. “It was an honor for me to be able to do this job and be able to work with wonderful people. I couldn’t do what I did had it not been for everyone there.”

Lawless presented Goodall with a Colt 45 handgun from the sheriff’s office on his retirement.

“I’m truly thankful,” Goodall said. “And I’m truly honored and privileged to have served the people of Lawrence County.