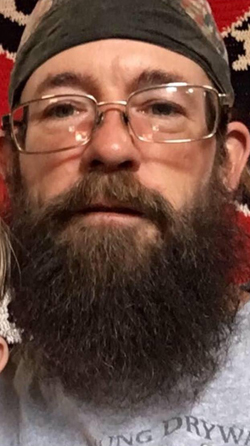 The Lawrence County Sheriff’s Office is searching for a Kitts Hill man who was reported missing last week.

Billy R. Harper, who lives on County Road 19, was reported missing on April 22 by family members who said they hadn’t had contact with him since April 20.

According to a release by sheriff Jeff Lawless, Harper sent a text message to his son but has failed to show up to see him and he has also not shown up for work since April 20.

Harper, 41, is a white male with brown hair and blue eyes. He us 5-foot-10-inches tall and weighs about 155 pounds. He has a beard and a mustache and wears eyeglasses. He is believed to be driving a black and sliver Toyota RAV 4 with Ohio license number BZ98AZ.

“Some people thought they may have seen his vehicle on Thursday or Friday, but when they went back again it was gone,” Lawless said.

Lawless said the vehicle was last seen around Township Road 198, also known as Fire Tower Ridge or Ruckers Ridge. Lawless said deputies did an extensive search of that area.

A search of Harper’s home was conducted and Lawless said there were neither signs of foul play nor any signs that Harper planned to be away from the home.

“The phone company has been pinging his phone but it has not pinged back,” Lawless said, adding that Harper had been to a cell phone store several days prior to his disappearance trying to get his phone repaired.

“We have no reason to believe there is foul play involved in his disappearance at this time but it is out of character for Mr. Harper not to show up for work or make contact with loved ones for this period of time,” Lawless said in the release. “My deputies have followed up on every piece of information we have received since his reported disappearance. I had deputies out on overtime Saturday and Sunday checking wooded area and following up on leads. The investigation continues and we are hopeful Mr. Harper will return home soon.”