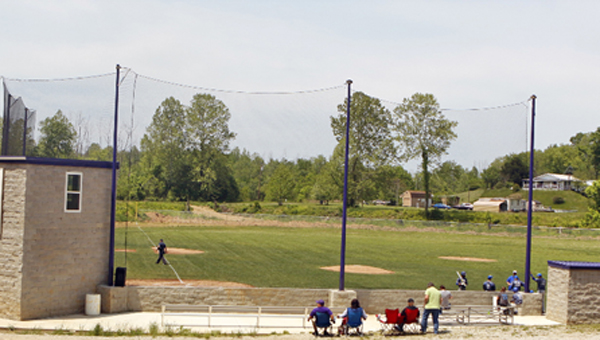 St. Joseph Central Catholic High School held a field dedication on Wednesday in celebration of its first-ever school owned baseball field and to honor those who helped make the project materialize. (Tim Gearhart of Tim’s News & Novelties on Park Ave. in Ironton)

The Flyers finally found a home.

Throughout the decades, St. Joseph High School has had to move around looking for a baseball field to play home games.

From Beechwood Park to Dow Chemical to the Ironton Senior League, the Flyers have bounced around trying to find a baseball residence.

The search finally came to an end this season when the Flyers began playing home games at Clouston Field. It marked the first time in school history the St. Joseph has had a home field it has owned.

The Flyers recognized those who helped in providing the new field with a dedication ceremony on Wednesday.

St. Joseph head baseball coach and athletic director Lou Mains presented a certificate of appreciation to Bob Ackerman, James “Jeb” Bihl and Father David Huffman for their roles in the development and completion of the baseball field project.

“Bobby Ackerman did a lot of work. He made it happen,” said Fr. Huffman. “Bob donated is labor cutting down trees and working on the field and getting us a scoreboard.”

“Jeb Bihl brought over some sod and saw we were building a baseball field. He had built fields in Kentucky. He had knowledge, workers and equipment. He brought in more sod, put in irrigation around the field and even built the mound.”

The field was built at Clouston Field, the site of the school’s soccer field. The property was originally used as the football practice field.

Due to shrinking enrollment, the football program was disbanded after the 1992 season and has since been used to house the soccer program.

About 18 months ago, Tom McCarty sent a check for $5,000 to Father Huffman to be used for the field project. McCarty died six months after sending the check and the field dedication on Wednesday was the one-year anniversary of his death.

Father Huffman said that not a penny of church or school money was used for the field. He said all the money came from donations and all the labor was donated as well. The estimated cost of the project was $100,000.

Originally Fr. Huffman planned to use the donation from McCarty for the gymnasium project. But Debbie and Mark Bamer of Southern Ohio Trenching called to tell him their business had some good fill dirt — between 100 and 200 truck loads — to dump and wondered if the school had a need for it.

Fr. Huffman asked Ackerman if it was a good idea and Ackerman took it and ran.

“Mark and Debbie not only gave us the fill dirt, Mark brought in a bulldozer and leveled the parking lot. He was a key player in this project, not just the dirt he brought in but with the bulldozer,” said Fr. Huffman.

Bihl works for Tri-State Nursery in Flatwoods, Ky., and Fr. Huffman was purchasing mulch for the chuch last summer. Bihl had some sod that had been ordered but not picked up and offered it to Fr. Huffman.

When Bihl saw the project in its infant stages, he joined forces with Ackerman.

Although the baseball team is able to play games now, Fr. Huffman said there is still work ahead. Additional plan call for the building of a dam to help prevent future flooding from when the Ohio River water rises.