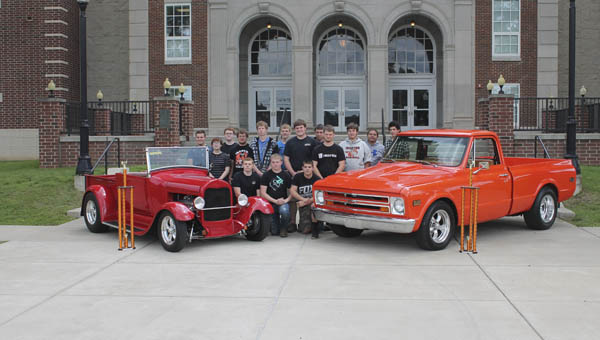 The Ironton High School Auto Tech class stands with the top winning cars from its car show in April. The car on the left won Judge’s Choice, while the truck took Students’ Choice.

This past week, the top winners brought their cars back to the high school to receive trophies for Judge’s Choice and Student’s Choice.

Claiming the Judge’s Choice award was Frank Mullens for his 29 Ford Roadster Pickup and receiving the Student’s Choice Award was Raymond Besco for his Chevy truck.

“The car show was a success,” Ironton superintendent Dean Nance said. “We also had four former students from the program enter, and all four are employed in the automotive industry.”

Also at the car show, four seniors from this year’s class, Zaylin Willis, Dakota Akers, Gavin Dalton and Drew Redmond, each received a $4,000 scholarship from Lincoln Tech in Indianapolis, Indiana, one of the largest tech schools in the nation.

Each said they were looking forward to attending Lincoln Tech in the fall and are studying diesel.