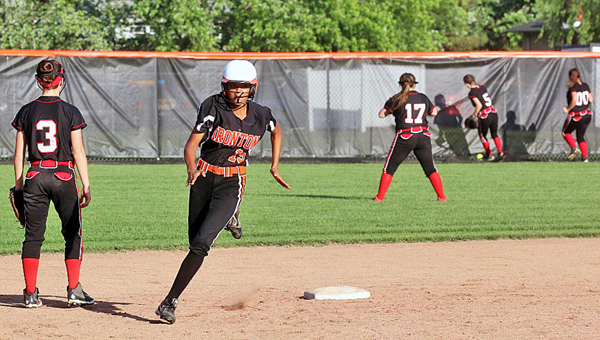 Now that was a sectional championship game.

In a game that featured 24 runs, 29 hits and 15 errors, the Ironton Lady Fighting Tigers outscored the Coal Grove Lady Hornets 14-10 to win the Division III sectional tournament finals on Friday.

“Both teams hit the ball well tonight and both of us struggled some on defense,” said Ironton coach Missy Fields.

“I was proud that my girls kept fighting. We knew that it was going to be a tough game. We worked hard this week in practice.”

Carmon and Mize had home runs — Mize’s was an inside-the-park homer — while Cremeens, Barcus and Katie Burcham all had doubles.

Coal Grove opened the game by taking a 2-0 lead.

Meyer singled, Murphy doubled her to third and Crum doubled them home.

Ironton answered with four runs in the bottom of the inning.

Stevens reached on an error, Barcus was safe on a fielder’s choice and the runners moved up on an error for a run. Cremeens singled in a run and Carmon followed with a two-run homer.

The Lady Tigers added a run in the second when Barcus and Cremeens singled and Carmon was safe on an error.

Coal Grove got the run back in the third on a leadoff home run by Murphy, but Ironton came back with five runs in the bottom of the inning to lead 10-3.

Shay Cox singled, Burcham doubled her home and Vaughn followed with a two-run homer. Stevens singled, Barcus doubled, an error scored Stevens and Cremeens grounded out to drive in Barcus.

The Lady Hornets put up their own five-spot in the fifth inning to get within 10-8.

Meyer and Gracie Riley reached on errors, Murphy and Crum singled for a run and Moore smacked a grand slam homer.

But the Lady Tigers scored three runs in the bottom of the inning to lead 13-8.

Vaughn walked, Mize singled, Stevens hit into a fielder’s choice, Barcus reached on an error for a run and Carmon singled and Barcus came home on the return throw from the outfield.

Coal Grove got a run in the top of the sixth when Murphy singled, Moore reached on a two-out error and Khyle Keaton had an RBI single.

Ironton scored its final run in the bottom of the frame on a two-out inside-the-park home run by Mize.

The Lady Hornets got an unearned run in the seventh when Shelby Zerkle reached on a one-out error, Meyer singled and Riley hit into a fielder’s choice.

Carmon got the win as only six of the runs were earned.

Murphy took the loss. She struck out four — she registered her 100th strikeout of the season on Thursday — and walked one.

Ironton will now play Alexander at 4:30 p.m. on Tuesday at Chillicothe Unioto High School in the district semifinals.