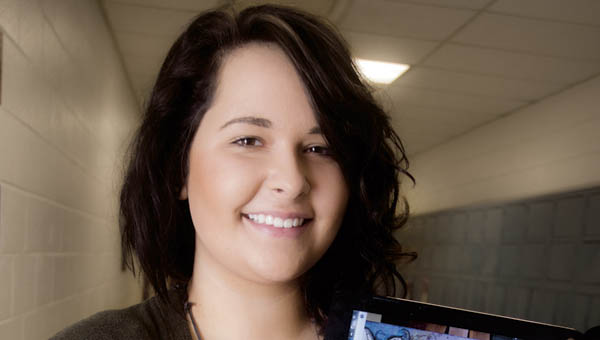 CHESAPEAKE — Braden Ward may be starting college this fall, as a student in Marshall University’s School of Art and Design, but she’s already amassed some notable honors in her field.

The Chesapeake High School senior’s work was chosen from students across southeastern Ohio as a finalist for the district of U.S. Rep. Bill Johnson, R-Ohio, in the 2016 Congressional Art Competition.

The annual competition selects winners from each district to go on display at the U.S. Capitol in Washington, D.C.

While the top honor went to a Belmont student, Ward, as a district finalist, will have her piece, titled “Contradiction,” on display at Johnson’s office, along with the work of two others.

Ward, 18, who lives in Chesapeake, said “Contradiction” was one of two pieces she submitted.

“They’re sketches that I did individually,” Ward said of the owls, fish, anchors and other subject matter in the piece. “I decided I wanted to do more with the background and incorporate it all together. It’s more about process, than outcome.”

This is Ward’s second year as a finalist for the district. She had a piece also go on display in Johnson’s office in 2015.

Ward has studied art for three years in high school, where she is taught by Robin Kimball, and, as a College Credit Plus student, has already taken two years of college courses from Ohio University Southern, including ceramics and painting.

Ward said her favorite subject matter includes eyes, animals and faces. She plans on continuing in art at Marshall, which boasts top-of-the-line art facilities in their new visual arts center that opened in 2014.

“They don’t have an illustration major, but I spoke to them and they’re going to customize one for illustration.”

In addition to the honors from Johnson’s office, Ward placed three out of four times in shows at OUS and has entered work in to competitions at the Huntington Museum of Art.

Gus Macker set for next weekend

Pancake breakfast added to list of special events The annual Ironton Gus Macker tournament will take over the streets of... read more