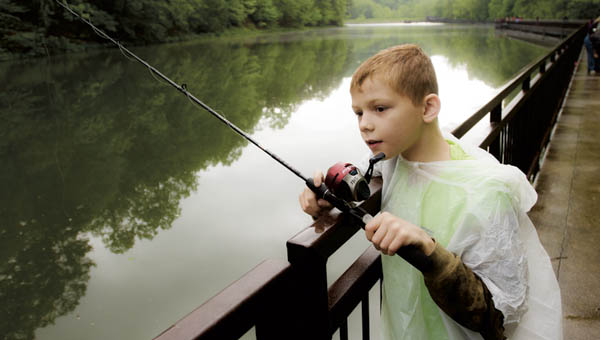 Children and their families lined up around Lake Vesuvius Saturday for the annual youth fishing derby, hosted by the Wayne National Forest and the South Hills Longbeards Chapter of the National Wild Turkey Federation (NWTF).

“We’ve been doing this for about six to eight years,” Chris Hayes, vice president of the NWTF chapter, said. “It’s an opportunity for youth to come out and enjoy being outdoors fishing under safe conditions.”

“The kids enjoy being with their friends and fishing for the opportunity to win some nice prizes,” Hayes said. “It’s something different than other activities they might do, and a lot of times this is the only opportunity they get to go fishing, see the bobber go down, bait the hook and catch fish.”

For Riley Cade, 11, of Ironton, the derby is something he enjoys.

“I just like fishing because I think it’s calming,” he said. “And you get to catch fish.”

Also from Ironton, Dominic Dixon, 11, said it was his first time at the event.

“I just like to see what kind of fish you catch after you cast your line,” he said. “I want to come back next year.”

Also available at the event was the JAKES (Juniors Acquiring Knowledge, Ethics and Sportsmenship) Take Aim inflatable shooting range trailer, where children had the opportunity to shoot Red Ryder BB guns at targets.

Fifty-four children, 34 parents and about 50 volunteers participated in this year’s derby.