Making use of technology 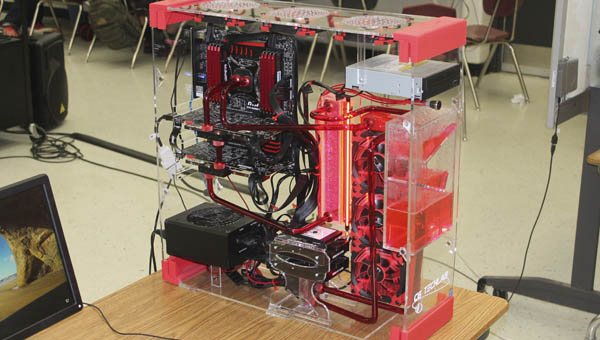 “It started out as a brain trust,” Waller said. “One of my students, Brandon Neff, designed the corner pieces and made them with the 3D printer.”

Waller said the corner pieces are made out of plastic filament for the 3D printer, while the sides of the case are made of acrylic and were cut using the classroom’s laser cutter.

“When we first started doing this, I sent emails to computer companies asking to help us out,” Waller said. “And I had several who replied and did help us.”

Among the companies who assisted by providing materials were PrimoChill and Hardware Labs.

“Everything on the case is either 3D printed or cut with the laser cutter,” Waller said. “We wanted a way to use the power of that technology.”

Besides Neff, Waller said students Logan Langley and Hannah Reny were also instrumental in the process, with Reny designing the “CG TECHLAB” logo on the side of the case.

Waller said that although it could take several months or even years to engineer something such as the class’ computer case, it only took about three months to design and complete.

Two Independent candidates will be on the November general election ballot. Petitions from Jonathan Ater and Katrina Hunt were certified... read more