Bring on the Macker 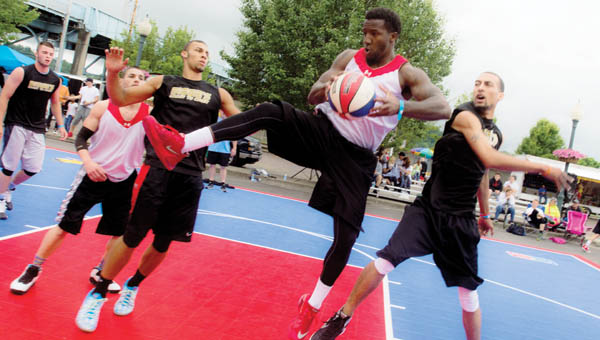 Donavin Vinson attempts a jump shot while playing on the top men’s court.

The rain held off but there were still showers at the Gus Macker tournament on Saturday — showers of corn dogs and snow cones.

South Second Street was closed off from Washington Street to Park Avenue as amateur athletes challenged each other to come away with the top trophies from the final games on Sunday.

Every year since they were 10, Rock Hill basketball players took to the makeshift courts on the street. This year, the now sixth graders called themselves the Studs and by 11 a.m. had already won their first two games. Taking a time out to watch the competition they were gearing up for their hopefully championship game on Sunday.

“They love it,” David Hankins, their coach, said. “This is good for the community. The kids get to see other talent from other schools.”

Gus Macker’s 3 on 3 tournament dates back to 1987 and is geared for players of any skill range. Teams are divided into junior, adult or top and are matched up according to age, height and experience.

Johnny Hughes was down the street coaching the I-Town Ninjas, a team of 7 year olds sponsored by Our Lady of Bellefonte Hospital. His son, Jacob Hughes, was playing on the team.

“They love sports and this gets the kids out of the house and playing video games,” Hughes said. “It is great for the community. Some kids don’t always play organized sports in school and here they can play. It teaches them teamwork, setting goals and discipline.”

The old Ironton-Russell Bridge has been named to the Preservation Ohio 2016 list of the state’s most endangered historic sites... read more