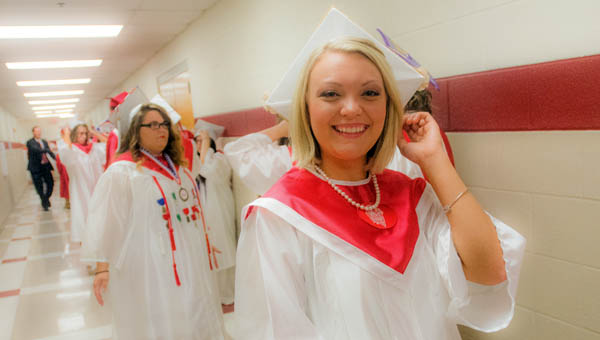 Emily Murphy had decked out her mortarboard with pastel roses and was waiting to take center stage at Rock Hill High School’s graduation.

“I’m excited and nervous,” she said. “I’m one of the valedictorians and I have to give a speech. You want it to be perfect.”

Her game plan after Saturday’s ceremony was to start at Shawnee State University to study education.

“The teachers here were so inspiring,” she said.

This year Rock Hill graduated 113 seniors, all with plans for college, work or other kinds of education.

“I think they are a superior group of young people,” Dennis Hankins, board of education president, said before the ceremony.

Like Savanna Summers, who plans to study early childhood education.

As she was waiting for the processional to start she admitted to being “nervous and happy,” she said.

Cassidy Skeens admitted she was nervous as well, but already knew the next step for her future — studying education at Ohio University Southern.

“I had so many good teachers here,” she said. “I just want to give back.”

James Tanner’s future plans also were focused on giving back. This time in another way. He plans to go to Ohio University Southern to study law enforcement with the goal of joining the state patrol.

“I want something that helps the community,” he said.

Hankins cited the success of the graduates as coming from a sense of communication between faculty and parents.

“There is such an esprit de corps,” he said.

SOUTH POINT — South Point’s village council voted at a May 10 meeting for an increase in water and sewer... read more