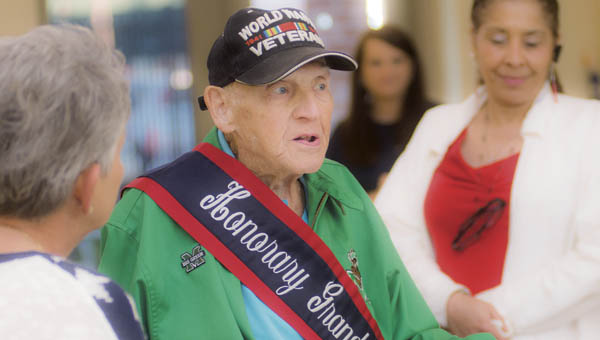 Less than a week away from the 148th Ironton-Lawrence County Memorial Day Parade, the annual Past Grand Marshal Dinner Tuesday evening at the Knights of Columbus payed tribute to past parade grand marshals while getting the county ready for this year’s event on Monday.

The Past Grand Marshal Dinner has been a tradition since the mid to late 1970s.

Leon Dalton led an invocation and the Pledge of Allegiance to kick the dinner off, and after dinner, parade committee member Brent Pyles took over the microphone as the master of ceremonies.

“We have lots of past grand marshals in the room right now,” Pyles said. “This is your night. Tonight we honor you.”

Pyles continued by introducing and giving some background information on the speaker of the evening, Ironton native Sgt. James Hopper, of the United States Marine Corps, who said he was honored and humbled to speak in his hometown, and talked about his experience in the Marines and his four deployments.

After each spoke, Hopper, Brown and Salyer were presented with plaques by Pyles.

Charlie Cook presented Jones with the honorary personalized cane given to each grand marshal every year before other awards were given. Jones presented flags from last year’s parade to her sisters, Laura Brown and Sally Markel-Inglis, as well as Sheriff Jeff Lawless. World War II veteran Earl Smith won the William Joe Williams Award.

Tax levy a consideration The issue surrounding the Lawrence County Jail is becoming bigger and bigger by the day. On... read more