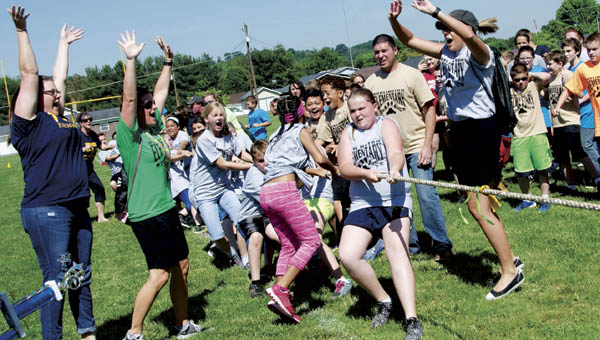 Burlington Elementary fifth graders win final tug of war match and the trophy as they face off with South Point Elementary during Field Day on Tuesday.

SOUTH POINT — In their last days at South Point and Burlington elementary schools, fifth graders get one last chance to win one for their school.

The two schools came together for Field Day on Monday and Tuesday at the field at South Point Elementary. As is the custom each year, the oldest students ended the festivities by facing off in a tug of war match for the trophy that travels between the two schools.

Since the schools began doing Field Day together five years ago, the trophy has changed hands, but, for the past two years, it has remained at Burlington Elementary.

The two schools gave it their all, but, in the end, Burlington emerged victorious and held on to the trophy.

“I guess it didn’t work out for us this year,” South Point administrative assistant Bill Christian said. He said he and Burlington Elementary assistant principal Michael Clay had engaged in some friendly teasing about who would go home with the prize this year.

“I said the trophy would look good in my office,” Christian said.

While the trophy match was the centerpiece of the events, students from all grades competed against their rivals in tug of war matches, the 50-yard dash and potato sack races, as parents lined the fence outside the field to cheer them on.

The kindergarten through second grade students competed on Monday, followed by the three oldest grades on Tuesday. All the classes had color-coordinated shirts with their school logos printed for the day’s events.

“We’ve been doing this since 2011,” Clay, who organizes the annual events, said.

After the competition was over, the students were treated to a lunch of hot dogs made on the grill.

Defendants get time in prison