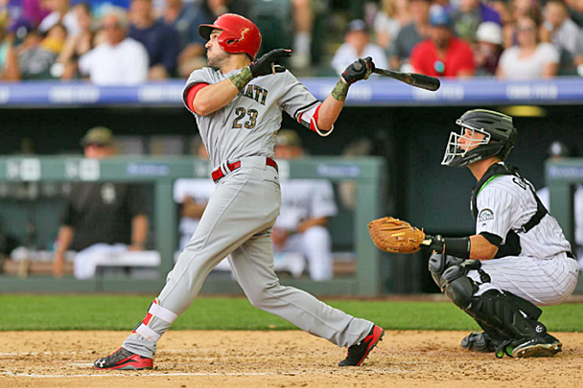 Cincinnati Reds’ Adam Duvall (23) hits a two-run homer in the fourth inning of Monday’s 11-8 win over the Colorado Rockies. Duvall also hit a solo home run in the ninth inning as the Reds belted five round-trippers in the win. (Photo Courtesy of The Cincinnati Reds.com/Justin Edmonds/Getty Images )

DENVER (AP) — A game that featured 28 hits and seven home runs turned on a walk to a pitcher.

Chad Bettis walked Dan Straily on a full-count slider in the dirt in the fourth inning and what was a four-run Colorado lead evaporated in an 11-8 loss to the Cincinnati Reds on Monday.

“I’m not even joking. It turned out to be a game-changer for us,” Straily said after picking up with win despite allowing five earned runs and eight hits over six innings.

“It’s no secret that my at-bats haven’t exactly been competitive. And I’ve been working really hard at trying to go up there and offer more to the team in that aspect.”

Once he saw a couple of balls, Straily fought off some pitches in hopes of drawing a two-out walk, “and it worked out in my favor,” he said.

Straily later scored during the five-run inning as the Reds erased an early 5-1 deficit in winning for just the fifth time in 24 road games.

They did it behind a season-best 17 hits, including five home runs — two from Adam Duvall in his first career multi-homer game, Joey Votto’s 200th career long ball, Zack Cozart’s shot leading off the game and a home run from Eugenio Suarez, who entered the game mired in an 0-for-28 skid.

Three scoreless innings from Straily (3-2) after a four-run blip in the third helped the Reds win for the third time in their last five games away from Great American Ballpark.

Reds manager Bryan Price praised Straily’s work at the plate as much as he did his dogged determination on the mound.

“He took an at-bat with two outs there and drew a walk, fouled off a bunch of pitches by Bettis, who was throwing hard, and eventually went to a 3-2 slider and Straily was able to lay off of it,” Price said. “And it extended the inning. And then Cozart puts the ball into play and then all of a sudden things are happening and we score a couple more runs there in a situation where I’m thinking maybe I should (pinch) hit here.

“But then you fry your bullpen your first game at Coors Field and you’re paying the price the next three games and I felt like Dan could rebound and go out there and give us good innings, which he did.”

The Rockies gave up five homers after entering the game having allowed a major league-low 15 in the month of May. Bettis (4-4) lasted just 3 2-3 innings and his walk to Straily really gnawed at him.

“You can’t have that happen at that point,” Bettis said. “It’s an at-bat that swings the whole game.”

Cozart followed with a single, Votto hit a ground-rule double and Brandon Phillips put the Reds ahead for good with a run-scoring single.

Carlos Gonzalez hit a two-run shot off Tony Cingrani in the ninth and came around to score on Daniel Descalso’s two-out single on Cingrani’s 32nd pitch of the inning. Right-hander C.J. Ramirez came in and retired Dustin Garneau on a fly out for his first major league save.

LEADING OFF: Cozart led off the game with his sixth homer and Charlie Blackmon responded with a leadoff homer, his fourth, in the bottom of the inning.

The only other time that had happened in Rockies history was Aug. 25, 1995, when Bernard Gilkey did it for St. Louis and Trenidad Hubbard homered for the Rockies at Coors Field. The last time it happened in Reds history was July 2, 2005, against the Astros when Orlando Palmeiro homered leading off for the Astros and Felipe Lopez did it for the Reds.

Reds: The Reds had Louisville C Raffy Lopez at the ready in case they had to put C Ramon Cabrera on the DL with a sore left ring finger. But Cabrera, who traveled to Cincinnati following Sunday’s game in Milwaukee, was cleared after an MRI and rejoined the team in Denver. Lopez returned to Louisville on Monday.

Rockies: Slugger Nolan Arenado got the day off much to the disappointment of the large Memorial Day crowd at Coors Field. Manager Walt Weiss said he took that into account but figured Arenado needed the break mentally.

Reds’ Hot Deal of the Week

Staff Report   CINCINNATI — Every week throughout the baseball season, the Cincinnati Reds will be offering a new “Reds... read more