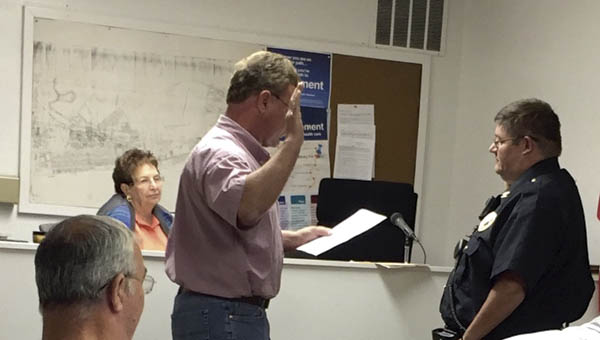 Chesapeake Mayor Tommy Templeton swears in Lenny Abrams as the village’s new police chief at a meeting of council on Monday.

CHESAPEAKE — The village of Chesapeake has a new top cop.

Lenny Abrams, who has been serving as an officer for the village for the past three weeks, was sworn into the job of police chief at a meeting of council on Monday.

“I would like to recommend this man for the position,” Templeton said. “He’s been on the job for three weeks and listen to what he has done.”

Templeton then read from a police report to council which outlined work Abrams has performed, which included cleaning out the police department and the chief’s office, locating crash and incident reports for 2013-2016, reviewing reports to complete FBI reporting, reviewing domestic reports to Ohio BCI&I, completing FBI reporting for 2013-2016, completing BCI reporting for 2015-2016 and requesting four M16 rifles from the state for use in patrol cars along with shotguns and pistols.

Templeton, along with council member Paul Hart, cited the completed FBI and BCI reports as being of particular importance, in that they would allow the village to apply for grants.

They also touted his work doing inventory of the department and the amount of equipment Abrams has procured from the state by using his contacts.

“These would cost us $2,000 each,” Templeton said of the multiple light bars for the cruisers.

Abrams, whose resume includes more than 20 years in law enforcement, was sworn in as an officer at May’s meeting of council. He also works part-time as an officer for South Point’s police force.

Hart said he had checked Abrams’ references there and “heard nothing but positive things.”

The position of police chief has been vacant since an April 12 administrative hearing, when the council voted 5-0 to remove Dennis Gibson from the office after Templeton charged him with dishonesty in office, malfeasance in office, insubordination and neglect of duty. Stover abstained from voting on the matter.

Aaron Christian, who has served the village for nine months as an officer, had filled the duties of chief in the interim.

Gibson has appealed his case to Lawrence County Common Pleas Court and is being represented by attorney Warren Morford.

Morford has said the council did not follow proper procedure and that the charges were based on hearsay.

If Gibson’s appeal is successful, he could be reinstated to his former position.

Man gets 5 years for assault

A man will spend the next five years in prison for attacking a Briggs Lawrence County Library employee in January.... read more