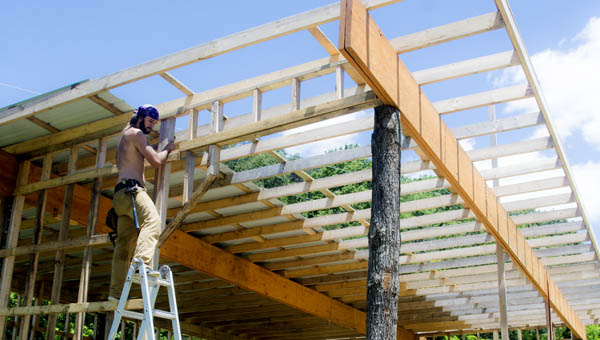 Steven “Shaggy” Brookshire, of Alabama, works on the main stage for the upcoming Val Stock festival located at the Green Dragon Farms in Kitts Hill.

KITTS HILL — A new music and arts festival is set to kick off in a few weeks, and organizers are putting finishing touches on the grounds in preparation for the opening.

Val Stock is set for June 30-July 2 at Green Dragon Farms on County Road 19 in Kitts Hill, and will feature more than 30 bands.

The team at the farm has been working toward the event for more than a year, Bethany Russell, one of the organizers, said. She said, in addition to the team at the farm, the community has chipped in for the effort.

“They donated wood to finish the stage,” she said.

Workers were still assembling the stage on Wednesday, which will face the farm’s field, large enough to hold a sizeable crowd.

Russell said the festival was the idea of Valerie Jenkins, the wife of the farm’s landowner, Homer Jenkins. Mrs. Jenkins was killed in an automobile crash in June 2015, and the festival is named in her memory.

“This was my wife’s thing,” Homer Jenkins said. “Anything she’d want, I’d give her.”

Russell said Valerie Jenkins had wanted to create a festival, which would raise funds to to get musical instruments into public schools, something the organizers said would happen with this year’s proceeds.

Organizers had also wanted to fill the void left by the end of the Appalachian Uprising, bluegrass festival in Scottown that ran through 2014.

Green Dragon Farms has hosted smaller musical events over the past year, as well as camping and workshops teaching people about crystals and skills such as soapmaking or how to build things, such as the outdoor kitchen the farm has.

In addition to building the stage, the crew has been cleaning up the grounds, setting up campsites and the kitchen and working on the farm’s bridge,” Poca Schultz, of the farm team said.

“It’s made from wood scraps,” she said of the bridge. “And we’ve made it wheelchair accessible.”

The festival will host bands from a variety of genres, with headliners including Ona, Restless Leg String Band, Fletcher’s Grove, Tyler Childers, String Therapy and Qiet!

“It’s eclectic,” Russell said. “Everything from funk to rock to bluegrass. A little bit for everybody.”

In addition to local and regional acts, the event will draw artists from across the country, with one, Sapphire, coming all the way from England.

Smaller performances will also take place in the farm’s barn, in addition to the main stage acts. A fire flow team will also do a performance, and inflatables and hot air balloon rides will be offered, courtesy of Bob Cleary of Ironton.

Also on hand will be food from Fantastic Spuds, as well as vendor with beans and cornbread.

Camping will be available on the farm’s 78 acres. Organizers suggested those coming bring supplies, since they will be in the country, though they did note there is a market about three miles from the site.

The event is open to all ages and organizers hope to provide safe atmosphere. Glass bottles, weapons, guns, knives, underage drinking and drug use will not be tolerated.

Those wishing to attend can get tickets through the festival’s Facebook page at https://www.facebook.com/Val-Stock-826162777498155, the Green Dragon farms website at http://www.greendragonfarms.org or www.missiontix.com. They can also be picked up at Granny’s in Ironton. Weekend passes are $80 each. Daily admission tickets run from $20 to $40. Weekend passes with RV hook-ups are sold out.

Budget could provide enough for Lawless to choose option Offering a budget that would give the sheriff enough money to... read more