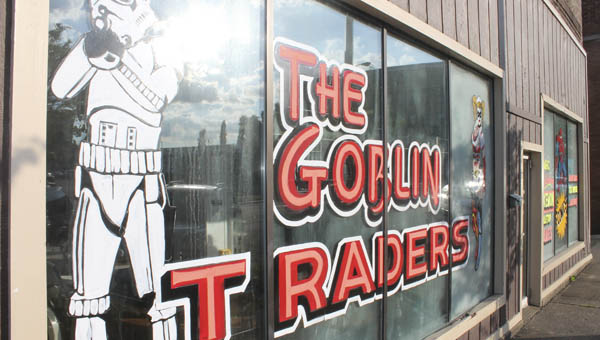 The Goblin Traders on Center Street in downtown Ironton.

On the first of November 2014, Bryce Martin, 22, of Coal Grove, opened the doors to The Goblin Traders, a comic book and game store that hosts various tournaments and, as Martin puts it, provides a place for people to hang out and have fun in a safe environment.

“There wasn’t anything else like this really around,” Martin said. “There’s hobby stores in the area, but no place to actually sit down and play.”

Martin said that the only other similar store in the area resides in Huntington and one of the reasons he got the idea for Goblin Traders was because a large number of people who attended and participated in Huntington traveled from the Ironton area.

Goblin Traders specializes in comic books, card games such as Magic: The Gathering and Pokemon and board games, including Star Wars X-Wing miniature games just to name a few.

“Everyone who comes here, it’s pretty much their second home,” Martin said. “We have people come from all over the Tri-State; around here, Jackson, Chillicothe, Charleston. There’s also people of all ages. We have kids as young as 10 or 11 and people as old as 60 or 70.”

The Goblin Traders hosts various tournaments with prizes each week every day except Monday and also serves as one of the primary sponsors of Tri-Con.

“I like seeing people come together and have a place to enjoy playing and hanging out,” Martin said. “And we don’t tolerate any kind of bullying. It’s a safe haven for everyone.”