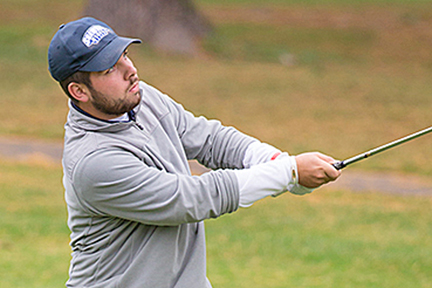 PORTSMOUTH — It wasn’t Michael Jordan, but it was still an impressive story in determination.

Much like the NBA great, Josh Zornes was cut from the freshman basketball team at Ironton. But instead of working on his game, Zornes traded his dribble for a driver.

What ensued was an All-Ohio golf career for the Fighting Tigers, a berth in the state tournament and a scholarship from Shawnee State University.

And Zornes didn’t stop there. He continued his diligence and put together a record-setting career with the Bears that culminate earlier this month by being named the Mid-South Conference Male Athlete of the Year.

“(SSU athletic director) Jeff Hamilton called me. I didn’t know what he wanted. I said, ‘What do you need?’ He told me I had been named the conference athlete of the year. I literally didn’t know what to say. I was speechless. He finally said ‘are you still there?

“I told him thanks and for picking me as the school’s nomination.”

Zornes said fate played a role in his career.

“I got cut from the basketball team and I also played baseball. I don’t know why I decided to play golf. It turned out to be a good move,” said Zornes.

The Athlete of the Year award combines athletics, academics and character. He will set it on the mantle along with his second team all-conference award, his two-time MSC Scholar-Athlete award, medalist honors in several tournaments and several school records.

But Zornes admitted this award was his biggest honor.

“That one is pretty special. I really wanted first team (all-league). I didn’t really think anything of (Athlete of the Year) when I turned in my paperwork. That’s the best award because it’s more than golf,” said Zornes.

The climb to become one of the best golfers not only in the conference but in Shawnee State history required a lot of work. Four-year assistant coach Dave Hopkins — who now assumes head coaching duties with the retirement of head coach Roger Merb — said Zornes’ work ethic was second to none.

“Josh was the most dedicated individual I’ve been around. He was hard-working from day one when he came onto campus until the day he walked off. He got the most out of his ability. To win the Mid-South Player of the Year speaks volumes for hard work,” said Hopkins.

Zornes was a second team All-MSC the past two seasons as well as an MSC Scholar-Athlete both his junior and senior years. He carried a 3.49 GPA on a 4.0 scale this past year as he worked to earn a degree in sports management.

Zornes set the SSU record with 16 consecutive rounds with a score under 80. He broke that record this past season with 19 straight sub-80 rounds.

“My first year and a half here was good, but it wasn’t my expectations. I played good in a few tournaments but not others,” said Zornes.

“The last tournament of my sophomore year something clicked. My junior year I started playing to what I thought was my potential. My senior year I didn’t shoot a round of 80.”

Zornes said he had a lot of unique experiences playing for the Bears.

“My freshman year we were pretty solid. My sophomore year we had some guys quit and we weren’t very good,” said Zornes.

“As a whole, it was a good four years. Most of the guys I played with we’re still friends. I met some guys from Canada, Australia, Sweden, France and England. I never expected to meet anyone like that. To play guys like that and see how good the competition was proved to be a great experience.”

Actually, Zornes’ golfing career at Shawnee State hasn’t quite ended. He has to pick up a few more hours in the fall to complete his degree. He has been asked to help the team as a graduate assistant.

“I’ll graduate in December and I hope I can work in the golf world or the business side and hopefully it will tie in with sports,” said Zornes.

Hopkins said one of the things that helped Zornes during his Shawnee State career was the support system of parents Brian and Cindy Zornes and grandparents Ray and Nancy Zornes and Fred and Barb Wells.

“His support system for four years was unbelievable. His mom and dad were there as much as possible and both sets of grandparents never missed a match,” said Hopkins.

At Ironton, Zornes was a four-year letterman in golf and was the team captain his final two seasons.

He was an individual state qualifier in 2011 and helped the Fighting Tigers win the SEOAL championship in 2008 and qualify as a team for the state tournament in 2009.

He was a two-time first-team coaches’ all-district selection as well as earning second team honor one season and honorable mention as a freshman.

• Program record for most consecutive rounds in the 70s (19)

HOUSTON (AP) — The Cincinnati Reds got a glimpse of the future on Saturday, and it helped lessen the sting... read more