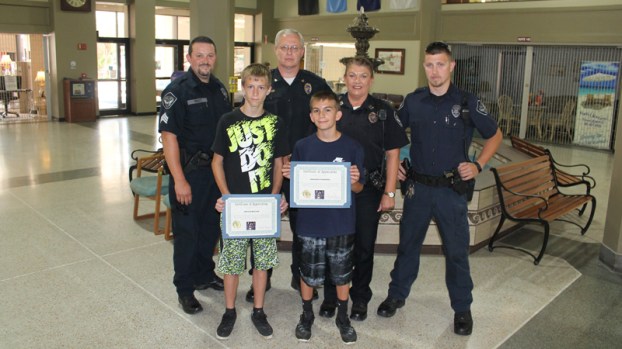 Nelson Roller, 13, and Dreyden Osborne, 14, of Ironton, with Sgt. Jamie Pruitt, Chief Dan Johnson, Capt. Pam Wagner and Officer Steve Breeding after receiving certificates of appreciation from the department for helping rescue a kitten from a storm drain early this month.

Two helped save kitten from drain

Certificates of appreciation were awarded to two Ironton teens by the Ironton Police Department on Monday for their work in assisting officers rescue a kitten two weeks ago.

On Monday, June 6, Sgt. Jamie Pruitt, of the department, said a call was received about a kitten being stuck in a storm drain on South Sixth Street at approximately 8:50 p.m., although it’s still unknown who called it in.

While police were there, Pruitt said they drew the attention of John Baker and John David Baker from O’Keefe Baker Funeral Home, who were the first people there and helped remove the drain lids.

“The kitten was halfway under the road,” Pruitt said. “Myself, Capt. (Pam) Wagner and Officer (Steve) Breeding tried to coach the kitten to the opening.”

While Pruitt and Breeding spent about 10 minutes trying to coach the kitten out, 14-year-old Dreyden Osborne’s parents stopped by to see what was going on before Dreyden and his friend, Nelson Roller, 13, arrived to the scene and got inside the storm drain to try to rescue the kitten.

“The kids came and went in the drain to try to coach the kitten out,” Pruitt said. “They used a long tape measure to scare the kitten from one side to the other and were able to get it out.”

Roller said he thought going into the manhole was fun, while Osborne said the experience was scary and that there were a lot of spiders, but both said they were happy to rescue the kitten.

On Monday, Pruitt, Wagner, Breeding and Ironton Police Chief Dan Johnson presented Osborne and Roller with certificates of appreciation for their assistance in rescuing the kitten.

The Osbornes kept the kitten for a few days before a friend permanently took it in.