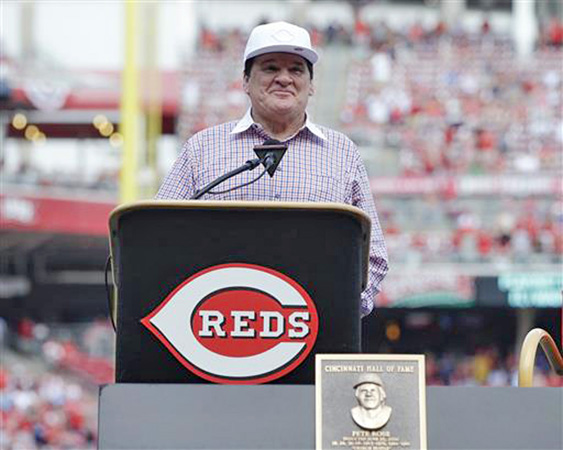 CINCINNATI (AP) — Pete Rose joked about his hair and his age. He reminisced about all those wins with the Big Red Machine. There was one thing that the hits king was determined not to do when he was inducted into the Cincinnati Reds’ Hall of Fame.

“I’ve already cried on the field one time,” Rose said on Saturday, referring to the time he got his record-setting hit. “That’s enough.”

The 75-year-old Rose kept his composure during a pregame ceremony honoring him as the 86th player to go into the team’s hall. Many of his former Big Red Machine teammates — Hall of Famers Johnny Bench and Tony Perez, among them — were on hand to join in the humor and the honor.

Also, to say a few nice things about the Cincinnati native known as Charlie Hustle who became the face of baseball’s first professional team in so many ways, with his gritty play and, later, his lifetime ban for betting on Reds games. His ban prevents him from getting into Cooperstown, but the Reds got permission to honor him in their own way.

“He’s the most dissatisfied person I’ve ever known,” Bench said. “Every day he was unhappy until he got four hits. He was never, ever happy with three hits. He wanted four.

“The greatness of this man was that he was never satisfied.”

Rose set baseball’s hits record with No. 4,192 at Riverfront Stadium in 1985 against the Padres, who also were the Reds’ opponent on Saturday. When he reached first base on his single, he wound up crying during a nine-minute ovation from the fans. As he was introduced at Great American Ball Park on Saturday, fans chanted, “Pete! Pete!” and gave him a one-minute ovation.

When he got to the podium, Rose used a towel to wipe the sweat from his forehead. He noted that he was allotted only five minutes to talk, when he could spend days recounting what the fans meant to him.

“I was hitting for you,” Rose said. “I was trying to score runs for you.”

Rose joked that he’s attended Hall of Fame inductions, but this was the first time he’d been invited to one. He told the fans that it was the “biggest thing that’s ever happened to me in baseball.”

Then he and Perez and Bench went onto the field. Perez threw a pitch from in front of the mound with Rose in the left-handed batter’s box and Bench behind the plate. The pitch was outside. Rose took it.

And then he got another ovation. The start of the game was delayed by six minutes because the ceremony went long.

Cincinnati natives Barry Larkin and Ron Oester also are in the team’s hall and recognized the specialness of being honored by the team they grew up admiring.

“Anytime you’re honored by getting inducted into the hall of anything, I think it’s wonderful,” said Larkin, who was inducted at Cooperstown in 2012. “But being inducted into a hall of fame for your hometown team, it’s personal.”

During a media availability that was streamed live on the Great American Ball Park videoboard and Major League Baseball’s website, Rose and his former teammates enjoyed the chance to trade barbs as well as compliments.

Bench said that by adding Rose to the team’s Hall of Fame, “It’s kind of complete.”

Rose wore a plaid shirt and a white Reds cap to the media availability and the on-field ceremony. He won’t get a red jacket like the ones that the other Reds Hall of Fame members wear until Sunday, when the Reds formally retire his No. 14 as well.

CINCINNATI (AP) — The Reds honored Pete Rose with a plaque. They couldn’t get him a win to go with... read more