Duvall excited to be selected for HR Derby 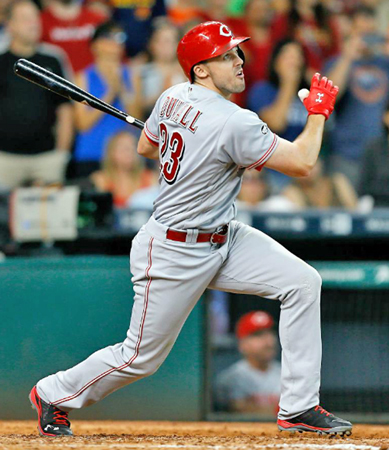 Cincinnati Reds’ outfielder Adam Duvall was named to the National League All-Star team on Tuesday and was asked to complete in the Home Run Derby this Monday. (Photo Courtesy of The Cincinnati Reds.com)

CINCINNATI — American Civil War General William Tecumseh Sherman was being considered as a possible candidate for president in 1984 but stopped any possibilities by saying:

“I will not accept if nominated and will not serve if elected.”

Evidently, Sherman is not a role model for Cincinnati Reds’ outfielder Adam Duvall.

After being named to the National League All-Star team on Tuesday, Duvall was asked on Thursday to participate in the annual Home Run Derby this Monday in San Diego at the site of this year’s All-Star Game.

Duvall said he didn’t have to ponder his decision.

“They asked me if I would go and I was 100 percent sold. I told them ‘yes’ and we just kind of waited to see who would go,” said Duvall.

“I just think it’s a great opportunity. It’s a blessing to even be considered for it. They’re giving me the opportunity and so I’m jumping at it. I’m excited for it.”

With 22 home runs on the season — third most in the league — Duvall will have a first round match-up against the San Diego Padres’ Wil Meyer who has 19 round-trippers.

Despite being in the same league, Duvall knows he has a daunting task going against the hometown favorite.

“He’s going to have the crowd behind him so that should be exciting,” said Duvall.

Many players in the past who participated in the home run derby have said it affected their swing the rest of the season. Duvall isn’t drinking any of that Kool-Aid. He said the competition is more about stamina.

“I’ve done a couple in my past and they’re very tiring but they’re a lot of fun. The crowd will be good so I’m sure it’ll be energetic,” said Duvall.

Instead of worrying about how the home run derby will affect his swing, Duvall is more focused on being selected to the All-Star Game.

“I just kind of think back at the road and the journey it took to get here. I’m super blessed. It’s an awesome feeling to be named and to play on the same field as a bunch of these guys. I just think it’s an awesome privilege,” said Duvall who also has 59 runs batted in.

“That means a lot because to be selected by people you’re playing against. It means that you’ve earned some respect.”

Reds’ manager Bryan Price told Duvall he made the All-Star team and the 27-year-old outfielder immediately called his parents, brother and girlfriend.

“All of them were super excited and couldn’t wait to book some flights and ready to get out there and watch,” said Duvall who admitted the list of family and friends attending the game was a work in progress.

“Right now I’ve got 12 people coming out and it’s a cross-country flight so it’s tough for a lot of people to get out. I’m super excited that those people will come and watch. But I think that total is going to be going up in the next couple of days.”

Duvall has listened to the advice of other Reds’ players who have played in an All-Star Game. He said all of them have told him to enjoy the moment.

Duvall offered thanks to teammates such as Joey Votto, Jay Bruce and Zack Cozart for their help in his success and development this season.

“I’m around a bunch of great guys in the locker room that have taught me a lot with Joey and Bruce and Cozart so I’ve tried to take in as much as I can. I’ve been fortunate to have some success,” said Duvall.

But making the All-Star team is only a small part of Duvall’s brief career. He knows there is a lot more work ahead.

“I just want to keep working hard and try to work on some little things that can help me become a better ballplayer. You just try and stay hungry because that’s kind of what I pride myself on. I’m excited for the journey ahead,” he said.

One of the things Duvall has learned from some of the veteran Reds’ players is how to adjust to playing at the major league level on an everyday basis.

“When you go from team to team, different teams try to attack you different ways. After your first at-bat you can kind of tell how they’re going try to get you out. You kind of got to be able to make adjustments on the fly,” said Duvall.

“I’m still getting better at that, but there’s still a lot of work to be done. It keeps you on your toes. It keeps it interesting to say the least.”

Duvall is aware that teams are building their scouting reports on him and that the success he has had the first half of the season is no guarantee the rest of the year.

“As a young player trying to establish himself the pitchers are going to make you earn it. They’re going to come at you early,” said Duvall.

“I had some success with some home runs and driving some runners in. I think guys are cautious, but I don’t think I’ve earned the respect that they’re just going to walk me to get to the next guy. I try to stay aggressive but at the same time try to get to a pitch that’s in my zone that I want to swing at. They call it selectively aggressive.”

Duvall is hoping that the rebuilding Reds are starting to show signs of improvement.

“It’s fun when you go in there and the crowd’s against you and they expect you to lose and then you win. The Cubs fans are kind of harsh out there. They like to get on you a little bit. That makes it fun as well.”