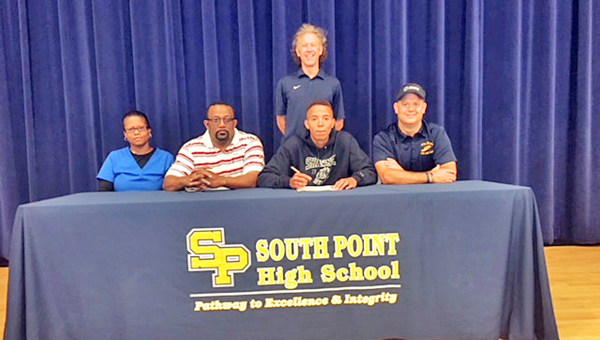 He ripped it off the hinges.

Given a chance to run track at the college level, the former South Point Pointers’ standout signed a letter-of-intent with Shawnee State University.

Hill moved to Ohio from Virginia and the different eligibility rules costs him his senior season.

But Hill looked past the roadblock in his future plans and continued searching for a college. He made a visit with Pointers’ coach Todd Wells and teammates Trent and Trey Patterson and Stephen Wagoner to Shawnee State to visit the campus and Bears’ coach Eric Putnam.

“(Sitting out the season) set me back, but it was worth it. I’m glad I’m getting another opportunity,” said Hill.

“My coach got hold of them and we all went down there for a college visit and (Putnam) wanted to meet all of us.”

The Patterson brothers and Wagoner all eventually signed with Shawnee State. Hill then followed his friends to become part of the newly formed track program at SSU.

“At the time I was still balancing where I wanted to go to school. It was just a lot praying and trying to find my way. I think that’s where I need to be,” said Hill.

“Having my teammates go there made my decision better. I know people. I was more comfortable making my decision.”

“He only ran his junior year and he has so much potential,” said Wells.

Hill teamed with the Pattersons and Wagoner to qualify for the state meet in 2015 in the 4×100 relay.

Regardless of where Putnam and his staff use Hill, he’s open to anything that comes his way.

“I think my opportunity will be good. I don’t know where they want me to be. I think they feel there’s a lot things I can do. I can’t wait to get there and get started,” said Hill.

Johnson proves to be true scholar-athlete at UPike