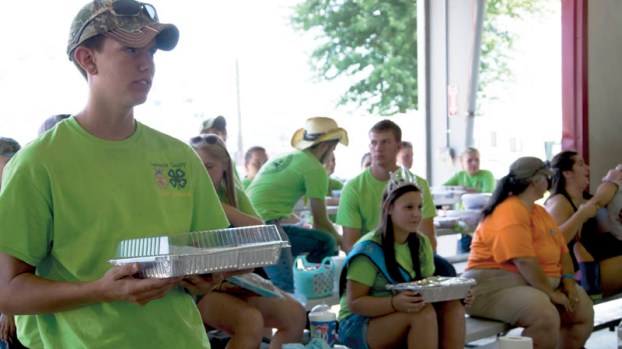 Members of the Lawrence County Junior Fair Board wait for the Sweet Tooth Auction at the fair to begin.

ROME TOWNSHIP — Members of the Lawrence County Junior Fair Board offered up sweets to bidders at the Sweet Tooth Auction on Monday.

In total, 35 members participated in the event, Rachael Fraley the 4-H educator for the Lawrence County Extension Office at Ohio University Southern, said.

“It’s their main fundraiser for the year,” she said. “It helps sponsor the showmanship trophy, and pays for educational training in the fall and their service projects.”

The members walked around the ring, displaying the homemade items, which included cakes, snickerdoodles, cupcakes, jellies and peanut butter cake.

“We’ve done this every year,” member Morgan Harper, who had a blackberry cobbler, said. “Each member is expected to make one or more dishes.”

Harper, of Ironton, was named the 2016 Lawrence County Fair Queen on Sunday. She was wearing her tiara as she showed the homemade goods to bidders.

“I was really shocked,” she said of her honor. “I didn’t expect to win. Those girls are just good people and really tough competition.”

All of the goods received bids from the audience, which included three candidates for the Lawrence County Commission, all of whom made the winning bids on multiple items.

The highest price paid for an item was $125, for the special Junior Fair Board Cake, which featured a barn and multiple animals in icing.

The final item auctioned, a cake, had multiple bidders after the auctioneer asked the crowd to “make it good,” and it ended up fetching $75.

When the event was over, Fraley said the final total was impressive.

Perseverance and a good choice of animals were the secrets of success for this year’s market rabbit show winners. Montana... read more