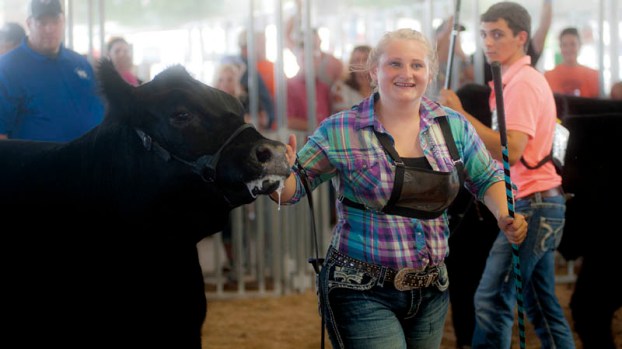 ROME TOWNSHIP — 4-Hers showed off their cattle to the judges and the crowd at the Lawrence County Fair on Wednesday during the market steer competition.

Dozens of cattle were entered, with winners chosen in each weight class, after they walked the ring before a packed crowd.

The overall grand champion of the event was Matison Klaiber, 16, of Willow Wood, who said she has been raising cattle for 10 years.

Klaiber was noticeably moved by the win, crying tears of joy when it was announced.

“Amazing,” she said, when asked how she felt. “I don’t have any words right now.”

The reserve champion was Marky Norris, 18, of Symmes Valley, who also came in first in his cow’s weight class.

“I’ve been doing this a long time,” he said, figuring he has nine years of experience with cattle.

“It feels great,” he said of his win.

Following Klaiber and Norris, the final drive consisted of: