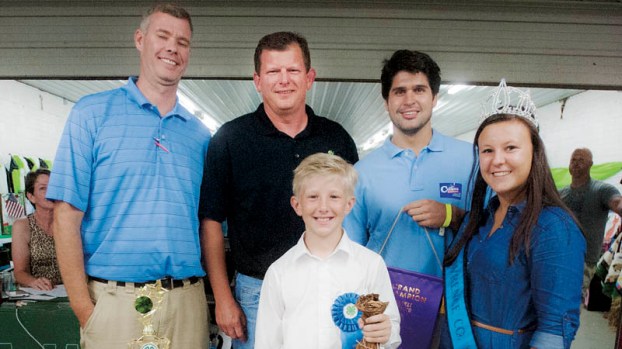 ROME TOWNSHIP — 4-Hers parted ways with their livestock at the small animal sale at the Lawrence County Fair on Friday.

A packed room, comprised of local business leaders, politicians and others cast bids on 169 lots.

Emma Barnette, 10, a student at Fairland West Elementary and member of the Rome Guys and Gals 4-H Club, was participating in her first year of the fair.

“It’s been a really good experience,” she said.

Barnette said she had raised two and was auctioning putting a 2 ½ year-old rabbit that she had raised up for bid. She said it is easy to get attached to the animals.

Levi Ross, 10, of Symmes Valley was also auctioning a rabbit.

The grand champion rabbit belonged to Montana Runnels, of Scottown, and a member of the Greasy Ridge Gang 4-H club,

The grand champion market chicken was put up for bid by Tyler Walters, of Scottown, and a member of Greasy Ridge Gang, fetching $1,100 from Holliday and Burcham.

The reserve champion bird, from Connor Franklin, of Scottown, and a member of Scottown Farmers and Farmerettes, actually earned a bit more, with an $1,150 bid coming from Glockner Family Dealers, Guy’s Floor Covering, Dynamic Safety Concepts and the Lambert Law Office.

The auction wrapped up with the sale of the winning heads of tobacco.

The grand champion was Wyatt Stallo, 9, of Chesapeake Elementary and the Greasy Ridge Gang, who got a $600 bid from Leighty, Stevens and Collins.

Stallo said that this year’s tobacco was planted last year and that he has already started growing for next year.

“This is my first year to bring it to the fair,” he said. “It’s exciting. I’m very grateful to all the buyers.”

In addition to growing the crop, the young farmers have to dry and strip it.

The reserve champion in market tobacco was Griffin Fuller, 11, of Pedro, and a member of Gingham and Denim 4-H, who received a $500 bid from Daine’s Insurance Agency.

All money from the auction goes to the individual 4-H members.

Hopping into the winners’ circle