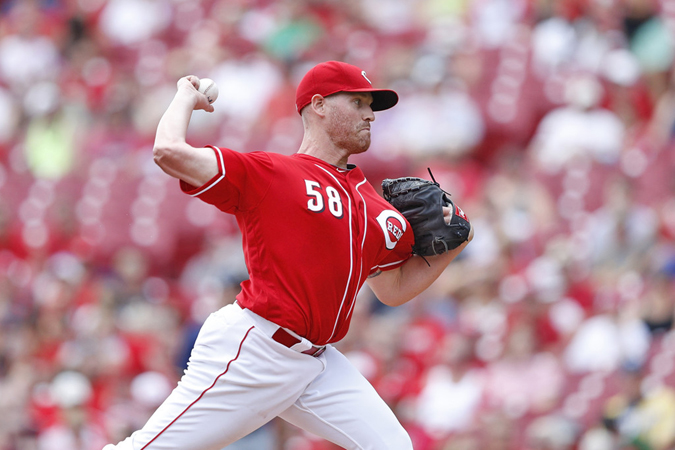 Cincinnati Reds’ pitcher Dan Straily has been a surprise acquisition this season. The Reds took Straily off the waiver wire in spring training and has been solid throughout the season. (Courtesy of The Cincinnati Reds.com)

CINCINNATI (AP) — Dan Straily has proved to be a valuable commodity on the mound and in the clubhouse for the Cincinnati Reds.

Straily, 27, was claimed off waivers at the tail end of spring training, becoming the third team to own his rights in a one-week period.

He initially was slotted as a long reliever, which at the time the Reds were desperate for quality arms in the bullpen. He produced a 3.24 ERA in three relief appearances, all of more than two innings.

But injuries in the rotation created an opportunity for Straily and he has taken full advantage.

“The performance has been sensational when you consider how we got him,” manager Bryan Price said. “He was going to be a long man and became really our most consistent starter from the beginning of the season to date.”

Straily will start Friday’s series opener against the Arizona Diamondbacks at Great American Ball Park. He pitched seven shutout innings on Sunday in a 1-0 win over the Milwaukee Brewers, allowing only three hits with a walk and four Ks in a no-decision.

On Friday, Straily will make his 21st appearance and 18th start of the season. He’s 4-6 with a 4.07 ERA, numbers that aren’t indicative of how well he has pitched.

Opponents are hitting only .212 against him, the 10th-best mark in the National League. He’ll be looking for his fourth straight quality start against the Diamondbacks in his first encounter with them.

But what has impressed Price most about Straily is how he has impacted those around him in the clubhouse, where he has been a positive influence on Cincinnati’s young players who are part of an ongoing rebuilding process.

“Straily has been wonderful, not just as a performer, his paramount responsibility, he’s also been a great guy on the team, an excellent teammate,” Price said. “He’s totally invested in the preparation stuff, the video, the advance reports, really a consummate pro. A fun guy to have on the team.”

On Friday, Straily will be opposed by right-hander Archie Bradley, who pitched six innings in each of his past four starts but went 0-2. He allowed only one earned run in his last outing, but it was a no-decision against the Dodgers.

At some point this weekend, the Diamondbacks hope to set a rehab schedule for ace Zack Greinke, who is trying to come back from a left oblique strain. He threw 20 pitches off the mound on Wednesday inside Chase Field. He threw long toss on Tuesday.

“It’s just a bad injury where you have to wait for it to heal before doing stuff,” Greinke told the Arizona Republic.

“Just used to having stuff bothering you all the time and just going through it still. But with this one, you can’t do that or else it gets worse.”