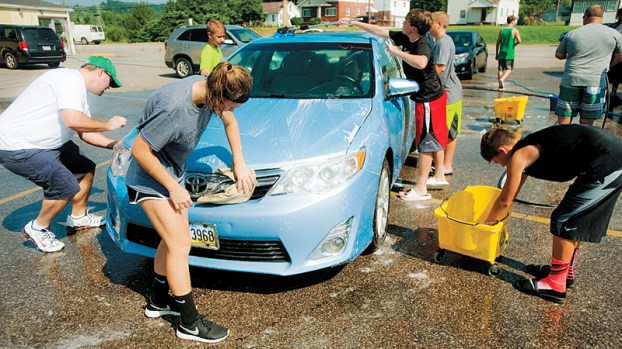 Volunteers with the Fairland Youth Athletic Department and Rome Fire Department volunteer their time Saturday morning with a benefit carwash for fellow classmate Cody Medley who has recently suffered from severe complication due to his diabetes.

Medley is a juvenile diabetic who recently suffered severe medical complications, including seizures, a stroke and going into a diabetic coma, as a result of his condition.

“We had a circle prayer this past Wednesday with almost 200 people,” Dee Brumfield, a close family friend of the Medley’s, said. “We decided to have a car wash and boot drive to help with the expenses to help the family out.”

Firefighters, friends, teammates and classmates helped out with the car wash and boot drive Saturday.

“These boys have been Cody’s friends since 6 years old, from school, sports, sleepovers,” Brumfield said. “This is donation only, and we’ve been getting everything from change to $100 dollar bills. It’s been great.”

Medley, who is known to his family, friends and the community as “Hollywood” because of his infectious personality and smile, remains in hospital care, where he’s been receiving treatment for about a week.

“Because critical care will likely be provided to Cody over a long period of time, we all just felt like his family could use a helping hand,” Joe Brumfield, assistant chief of the Rome Township Volunteer Fire Department, said. “Teamwork is nothing new to the volunteer fire service and youth sports programs where people have to work together to solve problems, overcome obstacles and achieve to win. Since Cody is known as a winner, we wanted to join his team and help him battle his illness.”

The Rome Township Volunteer Fire Department and Fairland Youth Football League wanted to express a thank you to Proctorville Dollar General for allowing them to use the parking lot area for the event, as well as Pizza Hut in Rome Township for donating lunch for the car wash workers.

Cameron Mayo, one of Medley’s friends helping at the car wash, said he’s happy to be able to do something for his friend.

Devin Bellomy, another friend of Medley’s, said he felt the same way.

“If any of us were in the position he’s in, he would definitely do this for us,” he said.

Paramount production camp culminates in free performance of “Willy Wonka Kids”   They have been at it for two weeks... read more